Yes the world is in a lockdown, and it is extremely hot and humid. But life goes on, and we still need to have all sorts of cakes and biscuits and cookies for Chinese New Year, although we are not taking any visitors. I am a super lazy person, and I hate dealing with heat, so I am really tempted to just buy everything festive bake online and get them delivered. However, most of them are just too sweet to even chew on. I'm not afraid of the calories, but the extreme sweetness that is usually unnecessary just puts me off.

Despite everyone telling me that you need to have that much sugar in baking to make it work, I have baked quite a few cakes and cookies with less than half the usual amount of sugar. Their texture all came out fine, and so did the taste. I made some Cherry & Orange Peel Christmas Shortbread Cookies a few years ago and they went down quite well with the elderlies, even with those who claim to have a sweet tooth. Since then, I have gained a few tips here and there from my friends who are veteran bakers, and I'm having a little experiment with this chocolate chip and orange zest shortbread cookies by substituting a small portion of the AP flour with corn flour and rice flour. If you can't get rice flour, just use corn flour, and vicé versa; if can't get either, just use all AP flour, it's fine too.

Why chocolate chip and orange zest? Simply because I do have some chocolate chips and lots of orange zest kept in store, and I think orange would go really well with chocolate, giving it a refreshing lift in taste.

250g softened salted butter (you can just use unsalted butter then add in a sprinkle of salt as you like)
250 all-purpose flour
30 corn flour
20 rice flour
60 sugar (trust me, it will be sweet enough)
180 chocolate chips
2 tablespoons orange zest
Being in the tropics, I do find that handling certain ingredients isn't that easy, such as orange zest or lemon zest. I have tried grating it with a zester before, but the extreme humidity made it wet and sticky, and ended up getting stuck in the holes of the zester. Absolute nightmare! I have then decided to do it my very different way, which is to thinly slice the zest off the skin of an orange whenever I'm having one, put them in a box and keep the box in the freezer immediately. Then when I have the time, or when I have accumulated quite a bit in the box, I will chop it really finely, and put it back in the freezer.
This way, I will have ample supply whenever I need some for baking, cooking, or even to add to my tea brewing. But I will have to make sure that I don't leave the zest out of the freezer for too long while chopping it, as it will get wet quite quickly in this hot and humid weather. And once the chopped zest is back in the box and in the freezer, I will need to give the box a few shakes every now and again during the first hour. This is to prevent it from becoming large frozen lumps in the box.
Making the dough:
In a bowl, mix the all-purpose flour, corn flour and rice flour together.

In a large mixing bowl, mix butter and sugar together and mix till smooth and a little fluffy.

Gradually add in the flour mixture and gently fold with a spatula till all combined. Add in the chocolate chips and orange zest, and gently mix till they are evenly distributed in the dough.
Rolling the dough:
Divide the dough into 2 and transfer each portion onto a baking parchment and roll into a log of about 2" diameter. As the dough is really soft, it is rather hard to handle the rolling part.
I used to first roll it up roughly then chill in the fridge for about 10 minutes to firm it up a little, then take it out and start rolling it tighter and to get the shape right. I would do this a few times till the dough roll is rather round in shape, otherwise it gets flatten on the side that it rests on.
This time, something caught my eye and gave me an idea - the core of clingfilm or baking parchment. I happened to have a couple lying around when the last two roll of baking parchment finished and I decided to keep the cores.
Here's what I did - just cut the core up the long way with a pair of scissors, and open it up.
Then carefully insert the rolled up dough into the cut up core. This way, the core will keep the dough in shape and not let the base get flat.
Chill the rolled up dough in the fridge for at least 2 hours before slicing. As I have only started doing the mixing in the afternoon, I chilled mine overnight so that I can do the baking the following day. I will be less tired, and less hot.
I have in the past tried scooping the dough onto the baking parchment, but I then I realised that I would need to have a few baking trays at hand, and plenty of space in the fridge to keep them all chilled - not a luxury that I own. Plus, I do like my cookies to have a sort-of even thickness as I find that gives an even bake, otherwise the thinner edge would get browned too quickly or even burned.
So this is something that can be altered and adjusted to one's needs and conveniences. Whatever you do, remember to chill them before baking. They don't have to be chilled to really hard, but just firm enough that a light tough with a finger doesn't make a dent. Reason being, soft cookie dough will melt and spread once it's in the oven (take it from someone who learned it the hard way many years ago).
Baking it:
Preheat oven at 180ºC and line a baking tray with baking parchment.
Take the dough logs out of the fridge and cut them, using a serrated knife, into about 1/3-inch thick slices. I find it easier to cut with the paper still in tact, as it's less messy. Also much easier to transfer each slice onto he baking tray, then just pull off the paper around it. But just need to make sure that all remaining paper is taken off. 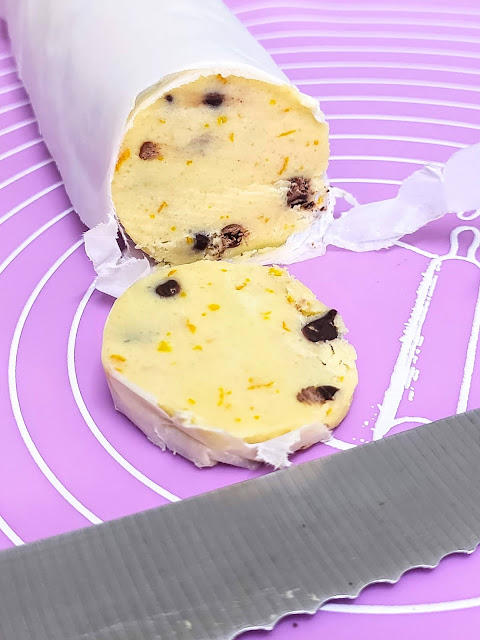 If the dough is still too hard, just leave it to soften slightly for a few minutes before cutting it. My problem is the opposite - the dough becoming warm and getting soft too quickly that I have to keep putting it back in the fridge to harden it. 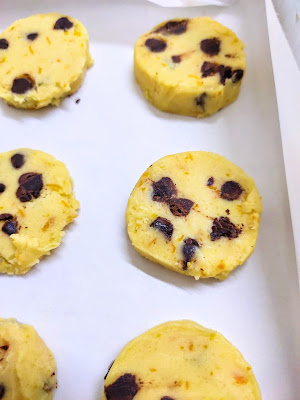 Bake for 15-20 minutes, check if it gets brown too quickly (as different ovens work differently). I did test mine using the dough from the ends of the dough logs, and I like them best baked for 15 minutes. 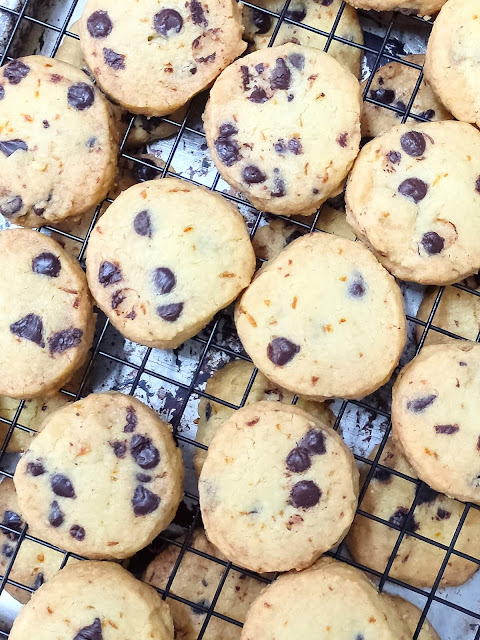 Leave to cool for at least 5 minutes before removing them onto a rack as they will be still really soft and fragile. Cool completely then store in airtight box, and do handle with care as these are really short and crumbly - I lost one by accidentally slipping it off the tray onto the chair and it broke into pieces - then went into my tummy 😂
Yields 48 cookies of about almost 4 cm in diameter, plus two from the ends of the logs for test bake purposes, and including the one that broke and got eaten. 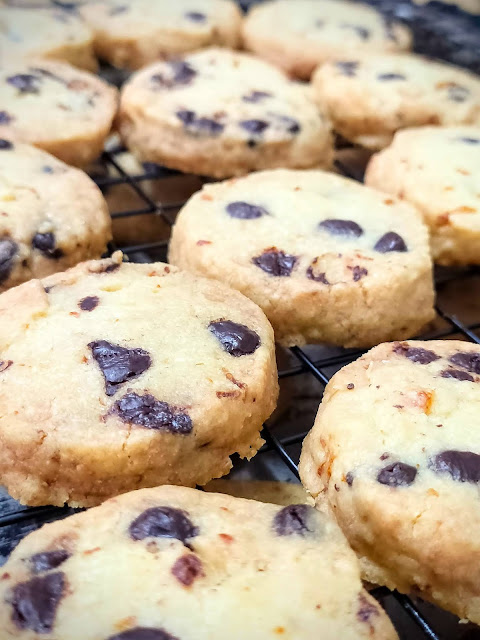 I was worried that the zest might make it taste bitter but after tasting it, I think I could even do with 1 extra tablespoon of orange zest added to the mix. I am also glad that I didn't add in any vanilla essence or it would have covered up the scent of the orange, which I really love.
I can't remember 100% how the texture of my previous cookies were like, but adding some corn flour and rice flour did not do any harm to it that's for sure. It probably has added to its crumbliness so I will keep doing this.