On this 7th day of Lunar New Year - also known as the birthday of all humans - I thought it's about time to bake another lot of bread, to break away from stuffing our faces with all those festive cookies and cakes. But instead of the usual white bloomer bread or just throwing in some walnuts, I have decided to make use of some of the festive food we have prepared for the Spring Festival - chicken meat floss - and make some chicken floss & cheese rolls!

Chicken meat floss is a common thing in Malaysia and we can easily get buns filled with or covered in it. During Lunar New Year, the Chinese here would actually stock up on meat floss (chicken or pork) and eat it as snack.
As the meat floss is in a really dry form, I am using cheese in the hopes to bind it together so that it won't keep falling off the bread when eating. Besides, the melted cheese should help to keep it a little moist.
I am using the 20% wholemeal and 80% strong flour (1:4) ratio this time (for other wholemeal:strong flour ratios please refer to Home-baked Wholemeal Breads of Different Flour Ratios), as I would like a rather soft and spongy bread, with not too long a proving time.
Ingredients for the dough:
100g wholemeal flour
400g white bread flour
7g Instant dried yeast
7g ground rock salt (or table salt)
3 tablespoons sunflower oil
300ml water (more if dough is too dry)

Sprinkle of dried mixed herbs (optional)
2 teaspoons freshly grated orange zest (optional)
For the rolls' filling:
Cheddar cheese, finely chopped (I have used about 40g but it is up to one's preference)
Chicken meat floss (or pork. And again, the amount is up to one's preference)
I have only used half of the dough to make the chicken meat floss rolls, whilst the other half stayed a plain, normal bloomer bread, just to meet different family members' requirements. Meaning, should you wish to try making this with the entire dough ingredients, you would want to double the amount of cheese and meat floss.
Ideally, I would love to add some mayonnaise to the chicken meat floss to make it even more moist and sticks better to the dough. Unfortunately I haven't any in the house at the moment, so that would be something to remember on my next online grocery order.
Preparing the dough
Put all the dry ingredients in a large and deep mixing bowl and mix them together. Make a well in the middle and slowly pour in the oil and two-third of the water. Start binding the flour together from the inside out (if I want to avoid getting my hand too sticky, I'll use a tablespoon or fork at this stage).
Slowly drip in the remaining water gradually (I may or may not use all of this, depending on how humid the weather is), to combine every bit into a soft dough before kneading it on a lightly oiled surface. You can also lightly flour the worktop for kneading but I do personally prefer oil.
After kneading for about 20 minutes, the dough has become smooth and it's time to prove it (of course, not without the windowpane test). Lightly oil the same mixing bowl and place the doughs in it. I usually leave it in the turned off oven to prove for about 1 to 2 hours, depending on the weather and humidity.
Now is the time to get ready my loaf tins and line them with baking parchment. I do this to make sure that the bread will come out easily every time.
Next is to get the cheese ready. I will do this just before the first prove of the dough is ready, by just chopping the cheese using a dough cutter.
Once the dough has at least doubled in size, punch back to knock out the air off the dough and divide it into two halves. Slightly knead and shape one of them into longish dough. Place it into a lined loaf tin and set aside.
Press the other half of the dough to form a rectangular (like a pastry), cover it with a layer of chopped cheese then the chicken meat floss. 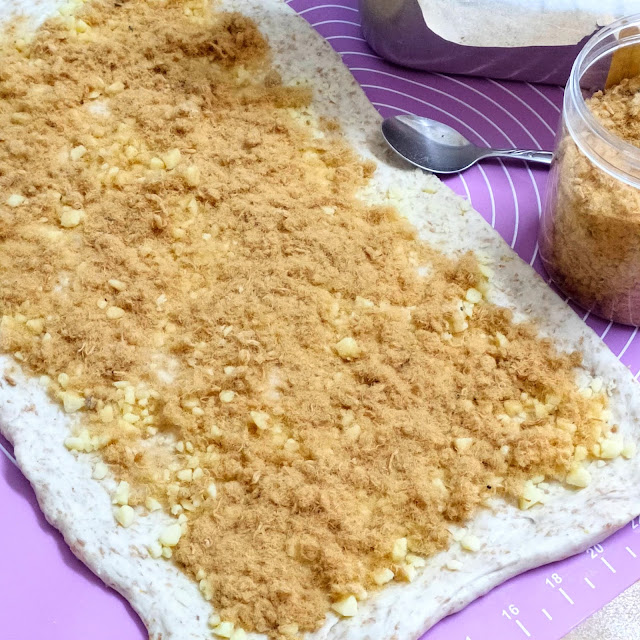 Gently and carefully roll the dough from one short side, like rolling a Swiss roll. Then, cut the rolled up dough into 4 equal parts and place them in the other lined loaf tin, like this:
Leave both the plain loaf dough and the meat floss rolls to prove for for further 1 to 2 hours or till double in size.
I think my dough-cutting skill does need some improvement, because when the dough is done proving the second time, I often find that the shapes become slightly unequal 😅
Set the oven to 200ºC.
Spray some water over the top of the doughs. Since I have two different doughs here with rather different size and thickness, I have put the much thicker plain loaf in the oven first, followed by the smaller meat floss rolls 10 minutes later. The latter is then taken out about 8-10 minutes before the former.
In a clearer picture, the baking times for both are:
Normal loaf - 200ºC for 25 minutes then turn heat down to 180ºC and bake for another 15 minutes.
Chicken meat floss rolls - 200ºC for 15 minutes then turn heat down to 180ºC and bake for another 5 minutes.
I could have baked them separately, but then the dough that's baked later would have proved for too long. Plus, I'm just lazy.
Email Post
Labels: appetiser appetizer baking bloomer bread bread Chinese New Year country bread herb bread herbs homemade olive rolls savoury side white bread wholemeal