Happy New Year! Well, I'm not sure if it would be one, but I will still wish that upon everyone, myself included.
I hadn't stopped baking in the whole 2020, but there was nothing new as I was mostly baking the usual bread so that we won't run out of it, as going out for a morning walk then bringing back some dim sum for breakfast was no longer an option for the old folks at home.
I did however, try out wholemeal bread, now that I can almost "master" the process of making a normal loaf. Health reasons aside, I do have a cousin who would gag for everything and anything with a "wholemeal" label on, whom I on and off practise a barter system with.
After much trial and error, I have concluded that - at least for my own liking - that the best ratio for wholemeal flour to strong flour is 1:4 to still maintain the sponginess of a normal loaf of white bread. The maximum amount of wholemeal flour portion I would be happy to go for is 40% of the total amount of flour mix. Anything beyond that would just be too tough a loaf, and the proving time is immensely long.
The breakdown of proving times and outcomes of my experiments so far:
20% wholemeal and 80% strong flour (1:4)
- soft and spongy bread, not much of a difference in proving time or dough texture.

40% wholemeal and 60% strong flour (2:3)
- bread texture is denser, needs at least 50% longer proving time to rise.
- Takes noticeably more effort in kneading and longer time to work up the gluten.
- Needs up to 3 hours for second proving to get a spongy texture (which is still dense compared to 1:4 ratio.
1 to 1 ratio
- bread texture is a lot denser. Takes a lot longer to knead and the dough is tougher and denser too.
- I will have to mix the dough the night before and let it prove for about 2 hours before placing it in the fridge overnight, then shape it as early as possible the next morning (the sooner it gets back to room temperature, the shorter time it takes to rise) so that it gets enough proving time to rise to a reasonable height. My record time for the second proving is 5 hours.

I will not go any higher than 50% of wholemeal flour as that is just not what anyone at home would like to eat, although I think my wholemeal freak of a cousin might actually prefer it. With a maximum wholemeal flour benchmark I have set for myself, I now adjust the ration within the acceptable range to meet the preferences of different people in the family at different times of the week.
What I have done today is a semi-wholemeal bread with a wholemeal to white flour ratio of something between 1:4 and 2:3.
Ingredients:
150g wholemeal flour
450g white bread flour
7g Instant dried yeast
7g ground rock salt (or table salt)
3 tablespoons sunflower oil
300ml water (more if dough is too dry)
Sprinkle of dried oregano (optional)
2 teaspoons freshly grated orange zest (optional)
Sprinkle of raw oats (optional)
Put all the dry ingredients in a large and deep mixing bowl and mix them together. Make a well in the middle and slowly pour in the oil and two-third of the water. Start binding the flour together from the inside out (if I want to avoid getting my hand too sticky, I'll use a tablespoon or fork at this stage).
Slowly drip in the remaining water gradually (I may or may not use all of this, depending on how humid the weather is), to combine every bit into a soft dough before kneading it on a lightly oiled surface. You can also lightly flour the worktop for kneading but I do personally prefer oil.
After about 20 minutes, the dough has become smooth and it's time to prove it (of course, not without the windowpane test). I do like to divide the dough into two parts so that they can be baked in my loaf tins and the baked loaves can fit nicely into my airtight boxes. 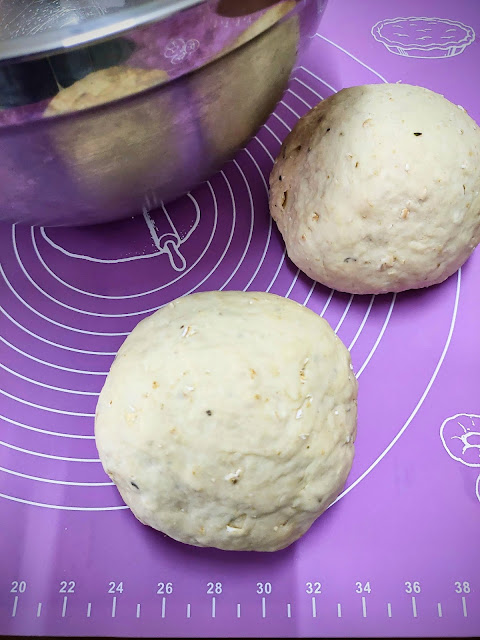 Lightly oil the same mixing bowl and place the doughs in it. I usually leave it in the turned off oven to prove for about 1 to 2 hours, depending on the weather and humidity. 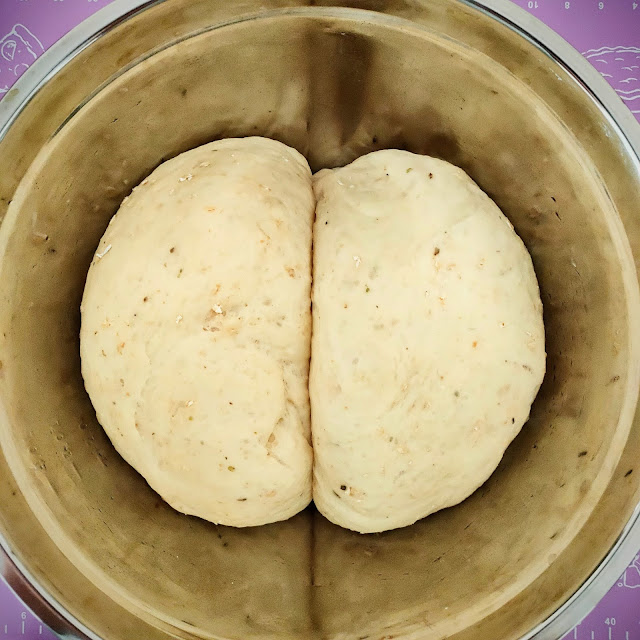 Now is the time to get ready my loaf tins and line them with baking parchment. I do this to make sure that the bread will come out easily every time. 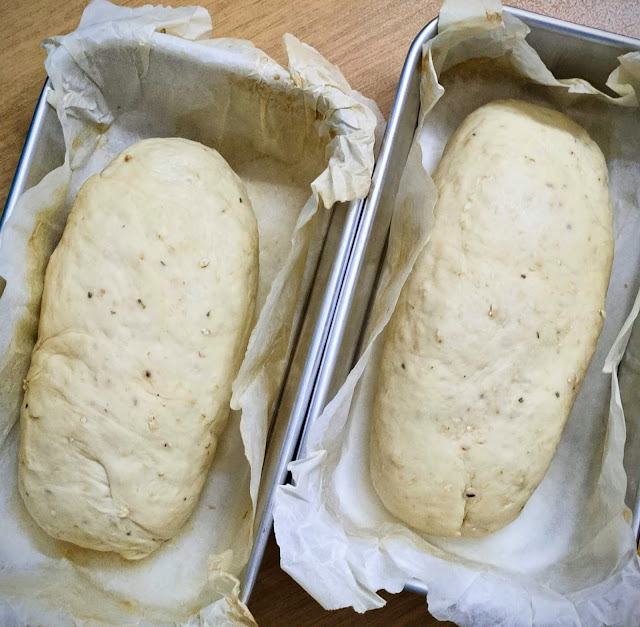 Once it has at least doubled in size, punch back to knock out the air off the doughs, slightly knead and shape them into longish doughs. Place them into the lined tins and let them prove for further 1 to 2 hours or till double in size. 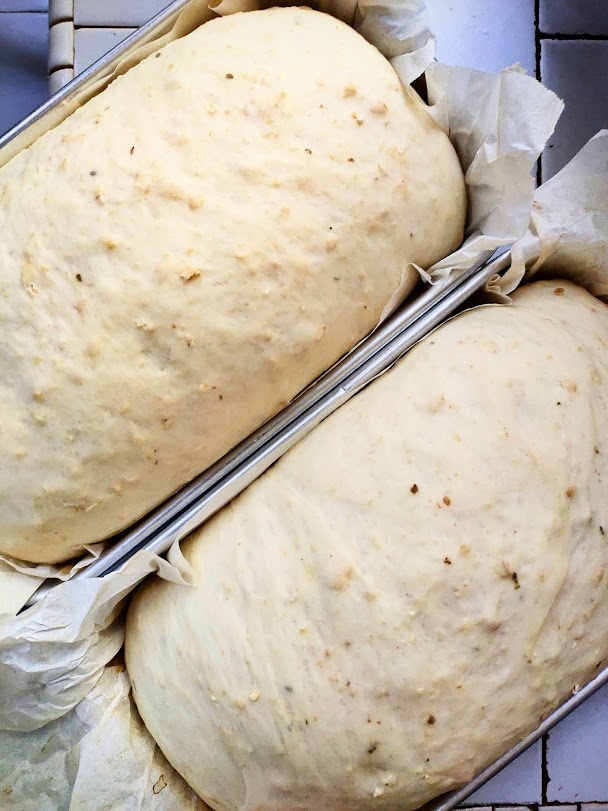 Set the oven to 200ºC.
Spray some water over the top of the loaves. Bake them for 25 minutes then turn heat down to 180 and bake for another 15 minutes.
From a previous bake, here's what it looks like when I've used about 45% of wholemeal flour: 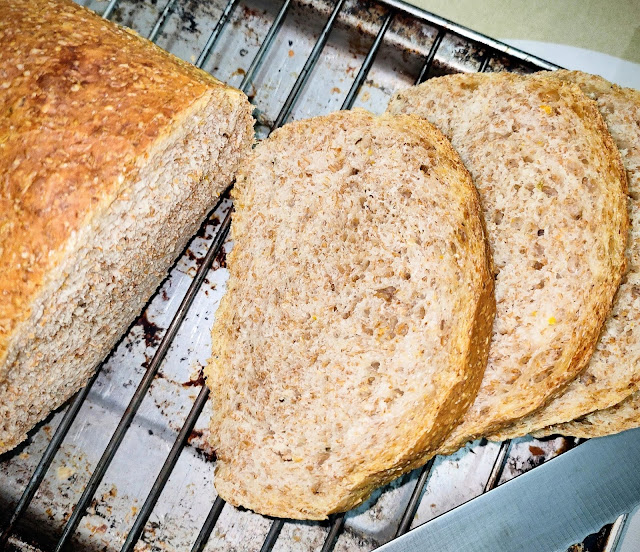