There was absolutely zero baking for Christmas 2020, except for bread - but mind you, that is staple, and cake baking is a luxury. Thanks to the Covid-19 pandemic, I am stuck in a different country 6000 miles away from my husband, so, baking for leisure is the last thing on my mind.

However, it is nearing Lunar New year and I did soak a bunch of mixed dried fruits in a jar with some whiskey (!), so that has to be put into some good use.
Over the past couple of years, I have gotten rather accustomed to baking something that is inspired by the Genoa cake, such as my Fruit & Nut Loaf Cake. I find it much easier to make, and it is a lot lighter than a traditional fruit cake.
This time, I have decided to make something that is closer to a traditional Genoa cake but low sugar, and with a Spring Festival cake top decoration. 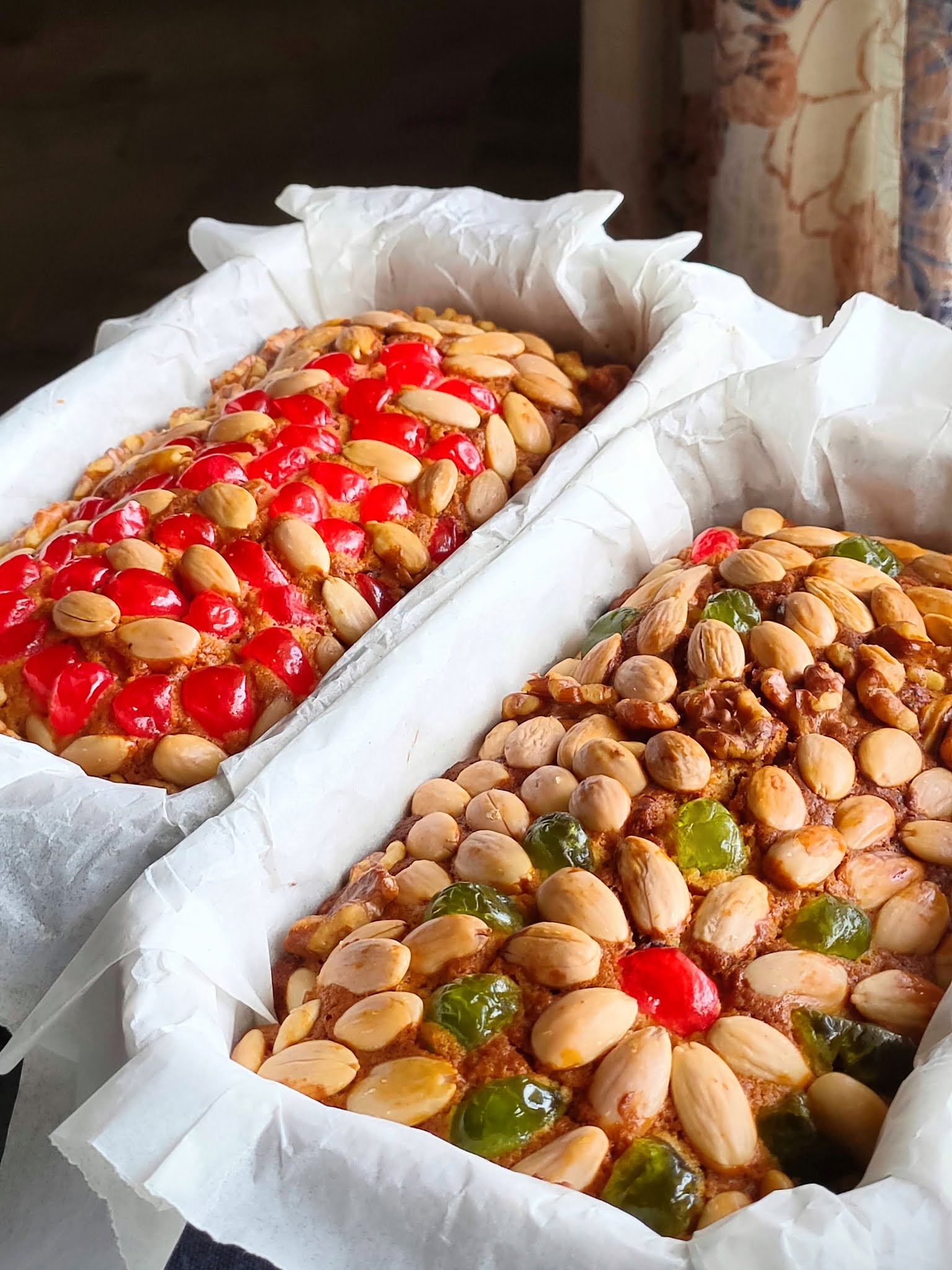 On the day of baking, separate the mixed fruits from any excess liquid and set aside.
Line 2 loaf tins with layer of foil then topped with a layer of baking parchment. I find this better than having 2 layers of baking parchment, as it tends to not burn the sides or the bottom too easily. Plus, the foil helps keep the paper stable and in place. I've skipped the tin greasing step because I find that the base turned out too oily when I did that.
Before starting with the baking ingredients, this is when I would prepare the cake top decoration ingredients. I like to quarter the glacé cherries as most of the family don't like to bite into a whole, or even a halved one.
When that is all set, cream the butter and sugar in a mixing bowl till light and creamy. Mix in the beaten egg in a little at a time, with a spoonful of flour every time if necessary, to avoid curdling caused by the egg.

When done with the eggs, gently fold in the remaining flour then the ground almond. Then followed by the soaked mixed fruit (and nuts if using) till just combined.

Evenly divide the cake batter into each loaf tin then level the top as much as possible. Decorate the top with the glacé cherries, walnut and blanched almonds.
Before putting them into the oven, flip the folded down baking parchment from all sides so that it can act as a heat dodger to prevent the cake top from getting burned too quickly.
Bake at 160C for about 1 hour and 30 minutes. Loosely cover the top with a sheet of aluminium foil for the first 45 minutes, then remove the foil for the rest of the time. When poked a metal skewer through and it came out clean, it's done.
Note: I was going for 1 hour 40 minutes initially, but the skewer test was good at 1 hour 30 minutes. This is mainly because I am using a different oven than before. It is always good to check and test for different ovens.
Take them out of the oven and leave them to cool in the tins for about 30 minutes. Removing them from the tin is super easy, just hold the long sides of the baking parchment and aluminium foil and lift. Leave on the rack to cool completely before sealing the top with aluminium foil to chill for the big day, or before eating them up 😋
To keep the cakes moist, I will add in a little more whiskey, or a few tablespoons of orange juice should I run out of whiskey.
Before bake: 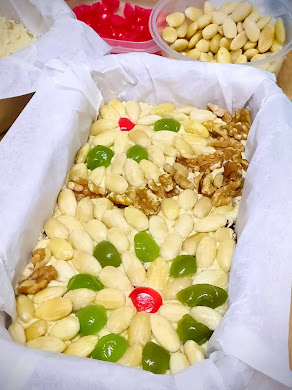 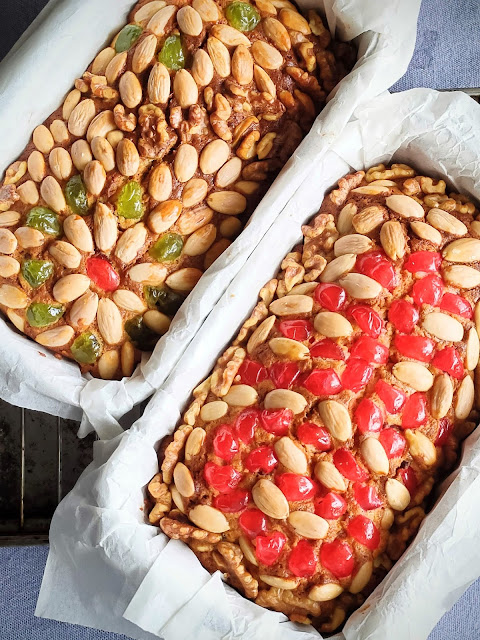 Although the character of 'spring' looked much clearer before going into the oven 😁 as the expanded cake top has kinda distorted how it looks on the final product, I'm quite happy with the outcome compared with what I have done with the Fruit & Nut Loaf Cake previous years. I shall see that as an improvement 😁
Email Post
Labels: afternoon tea baking breakfast Chinese New Year Christmas dessert festive genoa cake homemade low sugar no additives no waste cooking pastry pudding scone snack sweet teatime weekend snack