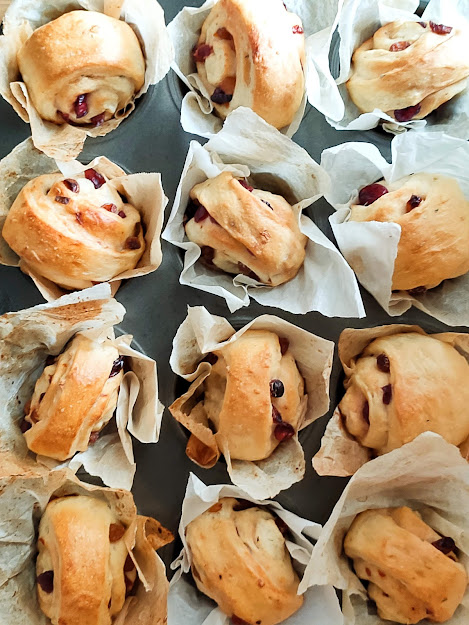 New batch on 14 May 2020: tried shaping the buns standing upright so that
the filling doesn't get burned so quickly. Turned out pretty good too!

Being in this lockdown where things aren't as controllable as before, some food gets overlooked or overstocked and ended up being not as fresh as expected when opened. This happens to the carton of fresh milk I've just opened yesterday; it was fine at sight and smell but when it's added to tea it turns a little curdy. I can still have it with oats and cereal but I can't possibly finish it before it completely turns bad.

To cut wastage to a minimum, I decided to substitute the water in my bread making today with milk for the sake of speeding up its consumption. After all, I have in the past used soured milk in bread dough and they all turned out fine.

As usual, I am adopting the method and base ingredients of the first bread I ever learned to make: the bloomer bread:

250g bread flour
7g instant dry yeast
3g ground Himalayan rock salt
1 teaspoon dry mixed herbs
2-3 tablespoons of sunflower cooking oil
Soured milk (or fresh milk, if your is not on the turn), according to texture of the dough
A sprinkle of ground cinnamon
A handful of mixed dried fruit: raisins, sultana and cranberries

I always prepare the filling first, which is to soak the dried fruits. Placing the dried fruits and the ground cinnamon in a bowl, I have added 2 tablespoons of Calamansi lime jam, which we made the other day using the fruit from our lime tree. The jam is quite runny as the only gelling agent we've used was the seeds from the lime, so it is just nice for soaking and no water is added. Place this aside in the fridge then I can move on to the dough.

After mixing the dry ingredients in a large mixing bowl (separating the yeast and the salt on on each side to avoid early retarding of the yeast by the salt), add in the oil the gradually add in the milk whilst binding the flour by hand till I get the right texture. I always remember the lesson I've learned which is: you can always add more liquid if the dough is too dry but you can never extract the liquid if it is too wet.

Once the mixture is slowly coming together to be dough-like, transfer to a lightly oiled surface for kneading. I'm using a silicone baking sheet as we haven't got a large enough proper worktop, and no we still haven't got a marble worktop to do this.

Knead for about 20 minutes, the dough becomes smooth and it's time to prove it. I will usually do this for about 2 hours, in a switched-off oven; as that's all we've got.

When the first prove is done, the dough should now be at least double in size. Knock back the dough to push the air out.

On the silicone baking sheet, shape the dough into a flat rectangle. Spread the soaked dried fruits all over the dough. Slowly roll up the dough, lengthways till it becomes a long roll. Cut the roll into 12 parts.

While doing our part in keeping our social distance, I thought I would make them more in line with the current global theme by baking them separately so that they are no longer a pull-apart bread. I don't know if anyone out there would have problem with me still calling it Chelsea buns, but hey, just thought I'd have a little fun with them in this tough time.

I've lined a 12-hole muffin tray with paper cake cups and divide the parts into the holes. Now prove for another 1 hour or so, or till the size is doubled. 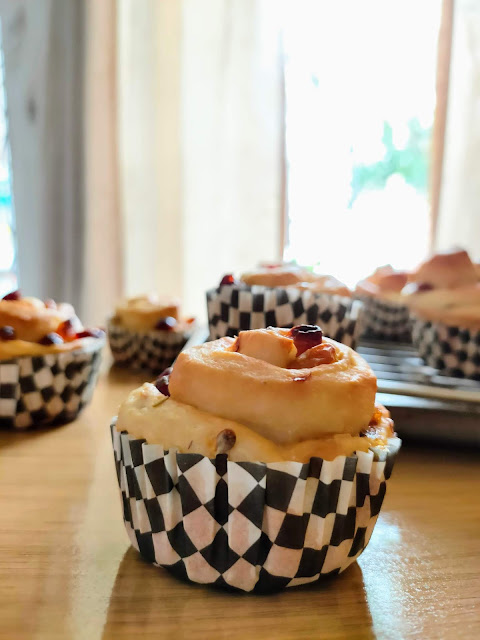 Here you go, our Chelsea buns who are absolutely obeying the social distance rules - so no one should worry about the risk of one's food being touched by the others 😂 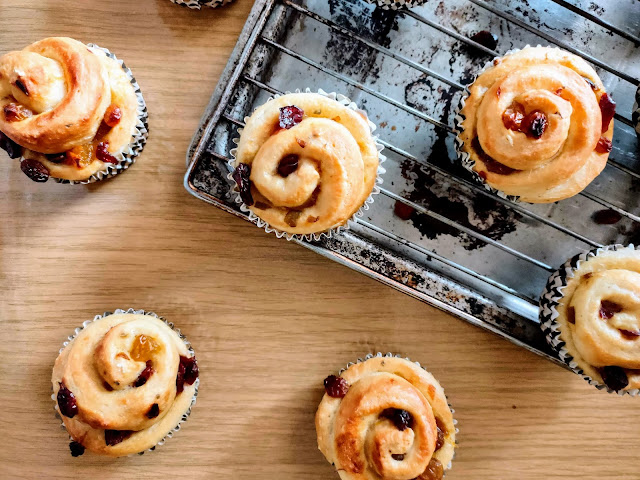 You may have noticed that I did not add any sugar to the dough, reason being, there are elderlies in the house who are borderline diabetic and I'm not a big fan of super-sweet food. All the sweetness has come from the dried fruits and the homemade Calamansi jam - which once I can get my hands on it, shall share the recipe too (this lockdown time makes me really lazy and just want to zzzzz...).

I have not added any glaze over the buns either, obviously, for the same reason.

Meanwhile, I am left with not too much soured milk [kinda] if I have to waste it eventually, and I don't feel too guilty now. Pretty sure I would find some other ways to use it on...