Chelsea Buns with the Simplest Ingredients During Lockdown 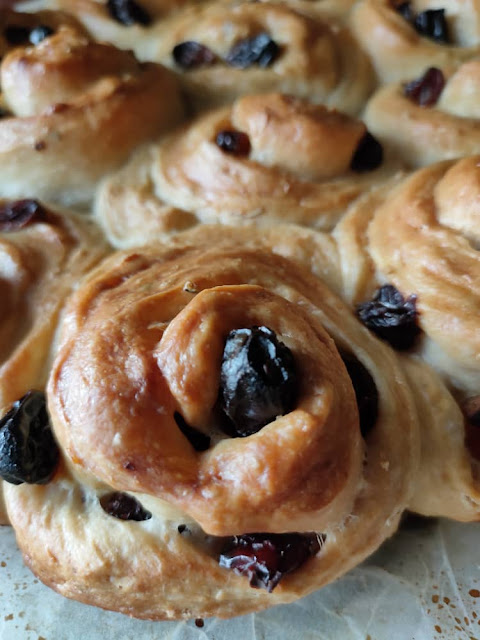 The past few months have been a mess - Christmas, year end, 2020, Lunar New Year, and now the global lockdown thanks to the crown which shall not be named. We now have to be so careful with our consumption of daily essentials, because it is just not easy - or even possible - to get food. And this is the time when I am so very glad that I have learned to bake bread, even though not excellently!

But at least, this is something that I can make for the family, which means that there is one item off of the online grocery shopping list. I am not that keen on Gardenia bread to begin with, anyway 😜

It's now fourth week of the Lockdown in Malaysia, I have baked about 7 times! Keeping some readily bread in the house on a regular basis would make things slightly easier especially during those hunger attack in the middle of the night, as there's no food delivery after 8pm!

After weeks of baking loafs, I thought I would have a batch of Chelsea buns (or cinnamon rolls, whatever we can call them); despite the extreme hot weather and my not-so-good dough cutting skill.

Once again, me being such an amateur, I am still adopting the method and base ingredients of the first bread I ever learned to make: the bloomer bread:

After mixing the dry ingredients in a large mixing bowl (separating the yeast and the salt on on each side to avoid early retarding of the yeast by the salt), add in the oil the gradually add in the water whilst binding the flour by hand. I no longer have a fixed measurement of water, as the weather here is so humid, that it would make the dough super sticky if I were to use more than 300ml. Nowadays I will just fill a glass and mix in gradually until I get the right-feeling texture - practices really helped. I now would also use my hand throughout the whole mixing process as I have gotten quite a hang of it.

Once the mixture is slowly coming together to be dough-like, transfer to a lightly oiled surface for kneading. I'm using a silicone baking sheet as we haven't got a large enough proper worktop (or marble worktop for that matter) to do such thing.

After about 20 minutes, the dough has become smooth and it's time to prove it. I will usually do this for about 2 hours, in a switched-off oven; again, that's all we've got.

But before proving it, I will divide the dough into two parts, knead and shape each into smooth round dough and place them back in the lightly oiled large mixing bowl. The reason I'm doing this is so that I can have two smaller loafs of different bread, as I may have different added ingredients such as walnut, sunflower seeds, oats, etc. And this time round, one of them would be the Chelsea buns dough.

When the first proving is done, the dough should now be at least double in size. Knock back the dough to push the air out. Once I have shaped one of the smaller doughs into a bloomer bread, and place it into a loaf tin lined with baking parchment, it's time to attend to the second dough.

On the silicone baking sheet, shape the dough into a flat rectangle. Sprinkle and rub some ground cinnamon evenly on the dough. Drain the liquid from the dried fruit and spread the fruit all over the dough. Slowly roll up the dough, lengthways till it becomes a long roll. Cut the roll into parts of 3cm length each. Line a small pizza tray with baking parchment and arrange the parts onto the tray, cut side up. 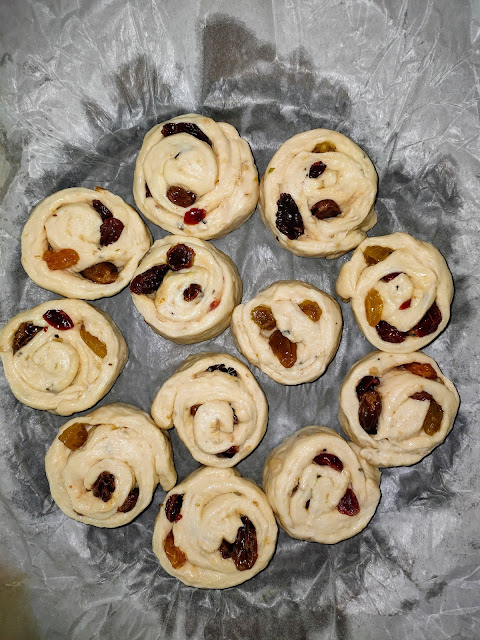 Now place both the loaf dough and the Chelsea buns dough back in the switched off oven to prove for another 1 hour or so, until the size is doubled. 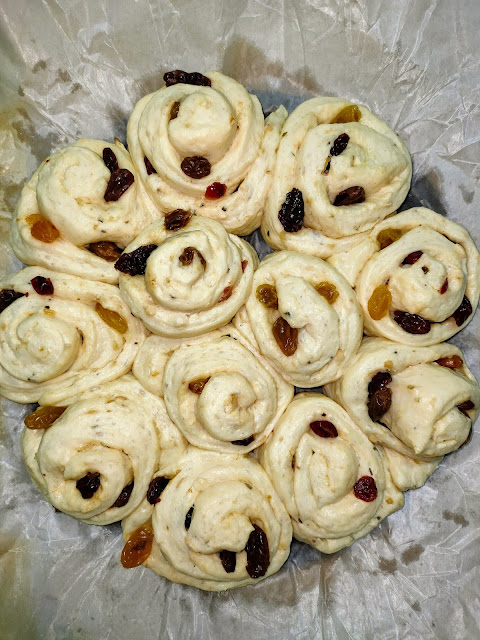 Once I've taken the proved doughs out of the oven, I will switch it on and set it to 200ºC. Meanwhile, the proved doughs will be sprayed with some water over the top. As for the Chelsea buns, ideally I should be brushing each one with egg white; but we're at a time where everything should be used with extra thought and careful consideration, I've opted for some UHT milk (something I can get relatively more easily from online grocers, and not as essential as eggs).

Baked at 200ºC for 25 minutes, then at 180ºC for another 15 minutes, I used to put both doughs in at the same time and found that the buns turned out slightly hard, so this time I have put the Chelsea buns in about 10 minutes later, and voila - my Chelsea roses!
Note from 20 October 2021:
I've tried a few more times baking just the buns alone and experimented on different baking times and temperatures (even with a different oven), and decided that they are best at 200ºC or 180ºC fan for 15-18 minutes. I can't speak for all ovens, environments and climates though, as I'm still getting different results from time to time depending on these factors. That's half the fun of baking! 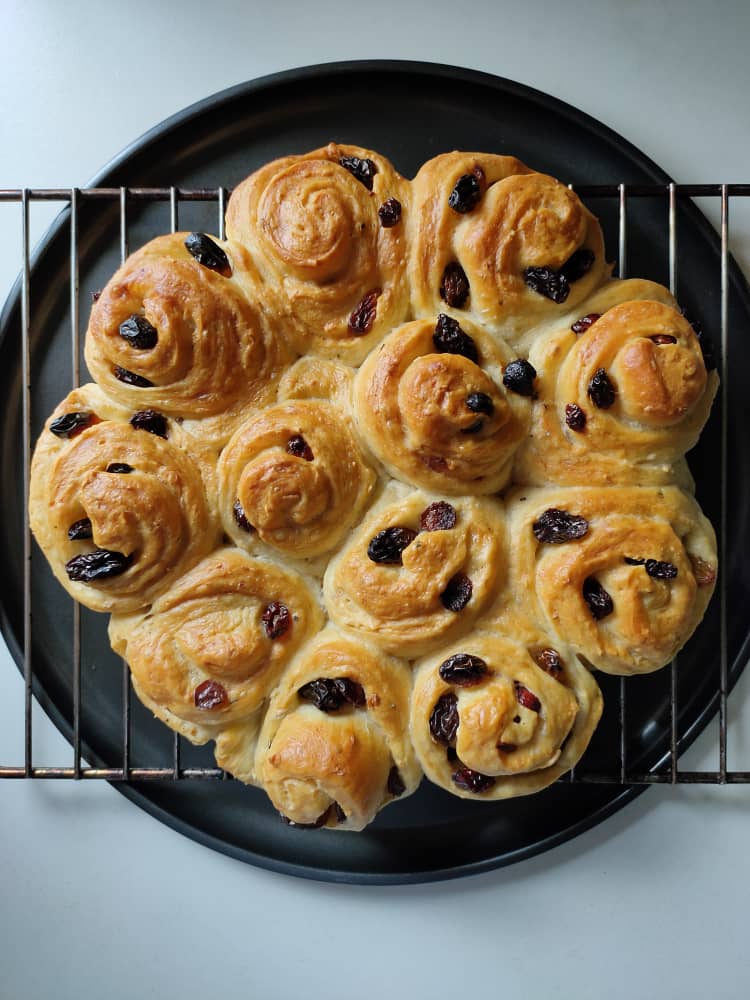