Of late I've been trying out my bread baking with some different additional ingredients, such as olives and cheese. Now I just fancy making one with my homemade candied orange peels and one with some almonds. I'm not planning on adding any extra sugar apart from the sweetness in the orange peels, as one of the elderly aunties I'm living with has mild hypoglycaemia. 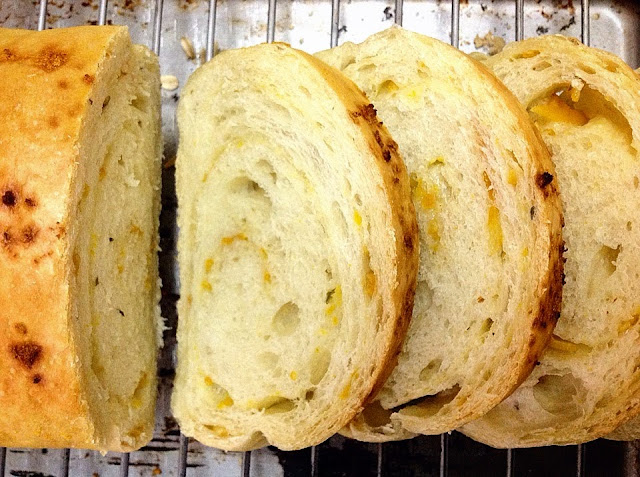 Part 1
2 tablespoons of homemade candied orange peels, roughly chopped
1 teaspoon orange zest
Mix the two and soak in a little lemon juice for an hour or so. I do this once the first proving starts.

Mix the dry ingredients in a large mixing bowl. Add in the oil then the milk whilst binding the flour together. Next gradually pour in the water slowly (I may or may not use all of this, depending on how humid the weather is), combine every bit into a soft dough before kneading it on a lightly oiled surface.

After about 20 minutes, the dough has become smooth and it's time to prove it. As my plan is to make 2 loafs of bread with different fillings, I will divide the dough into two parts at this point. To make sure that the parts are as equal as possible, I've used a kitchen scale.

Lightly oil the same mixing bowl and place the doughs in it. I usually leave it in the turned off oven to prove for about 2 hours.

Whilst waiting for the doughs to prove, it's time to prepare the fillings then put them aside. Next thing to do is to line 2 loaf tins with some baking parchments all the way up the sides.

When the doughs are done proving, take one dough out (I usually need to pull them away as they would've stuck to each other, but not merged) and place it onto a silicone baking sheet. This is something I've bought not long ago and find it extremely useful especially for someone like me who doesn't have a proper kitchen worktop. It sticks to the wooden dining table without moving around with the dough, and I can clean it, dry it and store away when I'm done baking.

I'm starting with the plain almond one as it's dryer so I don't have to wash my hands again before I move on to the next one which is wet and sticky (the soaked candied peel). Knock back the dough by pushing it down with knuckles and the heels of the hands till it's formed into a rather flat square. Scatter the chopped almonds all over the dough as even as possible, but not all the way to the edges. Slowly roll from the short side up, like rolling a Swiss roll. Turn the closing seam faced down then tuck each end down to shape a loaf. Place the loaf inside one loaf tin then sprinkle some extra zest over it.

Now repeat the same steps on the second dough with the orange peels.

Leave to prove for another 2 hours. 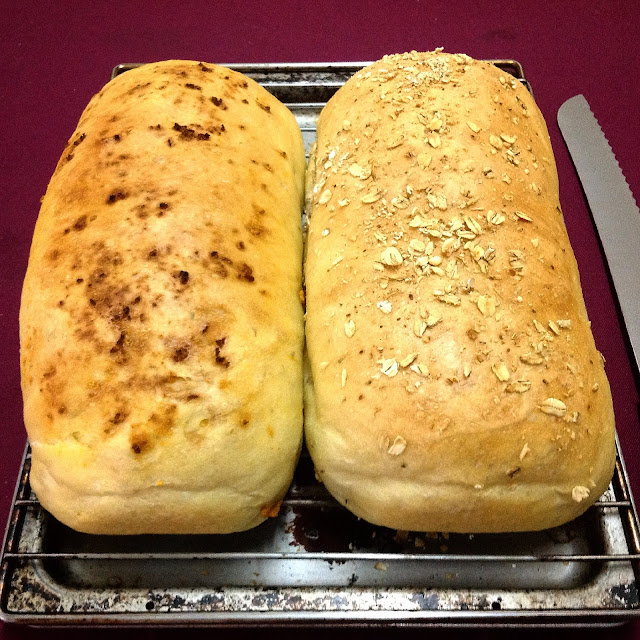 Once the doughs are done proving, spray a little water over the top. To further differentiate the two loafs, I've sprinkled some raw oats over the top of the almond-filled loaf.

Whilst baking, the aroma was unbelievable! The citrus smells made me think that it's Christmas already 😆

Probably not a bad idea to do something a little different this Christmas. Meanwhile, let's see if these loafs will last for at least 4 days... 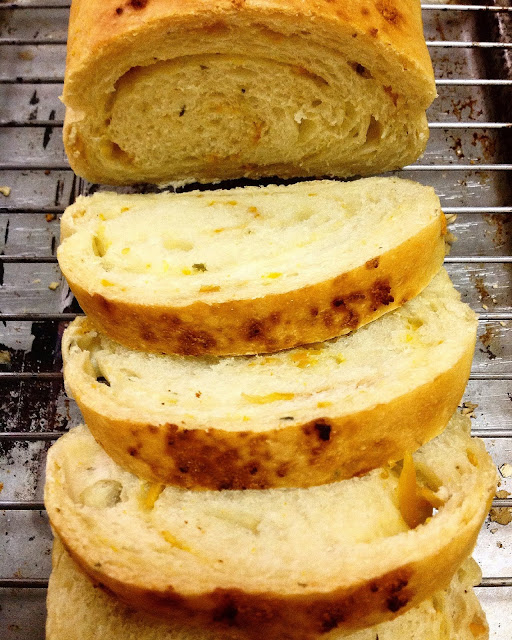