Updated Jan 2020:
Christmas 2019 wasn't much of a baking time either, and again I have opted for baking for Chinese New Year. Still the same recipe from before, except:
Here's the outcome this time: 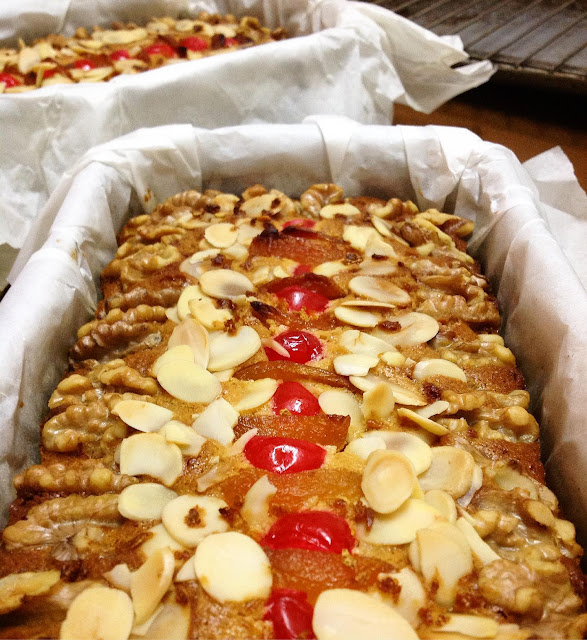 Due to some reasons, there was almost no baking done this Christmas except for the hardly Christmassy scone cookies just for the sake of feeling festive.

The good news is, we are celebrating Chinese New Year in a few weeks' time so I have some good excuse to do some festive baking.

This weekend, whilst everyone else is busy with spring cleaning, I assigned myself the task to bake some Genoa cake inspired loaf cake - with a few adjustments made so that it's less Christmassy (minus the glacé cherries) but more Chinese New Year feel (orange zest instead of lemon). 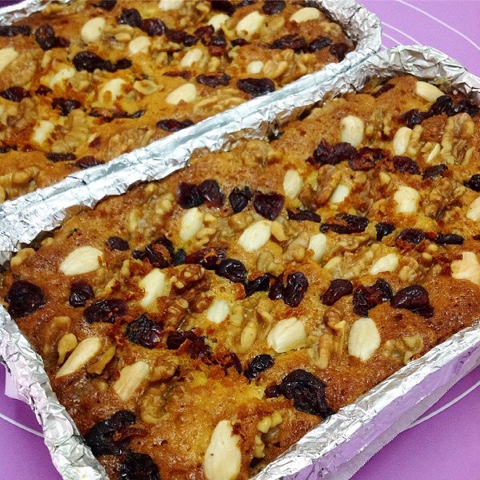 - black raisins
- dried cranberries
- a can of pineapple in syrup (strained), cut into small chunks

For decorating the top:
- Some halved blanched almonds
- Some halved walnuts
- Some dried cranberries (softened in a little wine vinegar)
- Zest of 2 oranges
I pre soak the mixed fruits in the fridge for a week with some syrup from the canned pineapple, added with 1 tablespoon of white wine vinegar. The liquid doesn't have to completely cover the fruit, just need to stir it around every now and then.

On the day of baking, separate the mixed fruits from any excess liquid and set aside.

Line 2 loaf tins with baking parchment then topped with a layer of foil. I find this better than having 2 layers of baking parchment, as it tends to not burn the sides or the bottom too easily. Plus, the foil helps keep the paper stable and in place. I've skipped the tin greasing step because I find that the base turned out too oily when I did that.

Cream the butter and sugar in a mixing bowl till light and creamy. Mix in the beaten egg in a little at a time, with a spoonful of flour every time to avoid curdling caused by the egg.

When done with the eggs, gently fold in the remaining flour then the ground almond. Then followed by the mixed fruit (and nuts if using) till just combined.

Evenly divide the cake batter into each loaf tin then level the top as much as possible. Decorate the top with the walnut, blanched almonds and dried cranberries, then sprinkle with the orange zest.

Bake at 160C for about 1 hour and 40 minutes. Loosely cover the top with a sheet of aluminium foil for the first 45 minutes then remove the foil. When poked a metal skewer through and it came out clean, it's done. 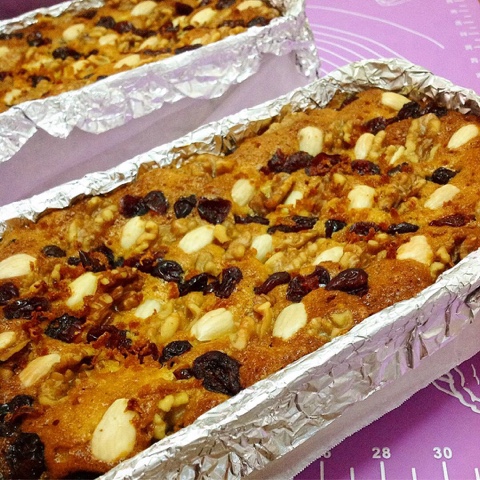 Take them out of the oven and leave them in the tins to cool for about 30 minutes. Then it can be easily removed from the tin by holding the sides of the baking parchment and aluminium foil and lift. Leave on the rack to cool completely before sealing the top with aluminium foil to chill for the big day, or eating them up 😋

To keep the cakes moist, some may add in a little rum or whiskey, but I'll be adding a few tablespoons of orange juice in every week or so.