I haven't been doing much in the kitchen of late due to being poorly - mainly thanks to the extremely hot and humid weather. And the last thing I can imagine doing in this heat is to face more heat in cooking!

But now that I'm recovering (touch wood!), what can be better than having something nourishing that puts some goodness back into me, than this Sweet Beancurd & Ginkgo Nut Soup Dessert?

I've always loved this soupy dessert and it really is so easy to make, even when you're not exactly in an energetic mode. 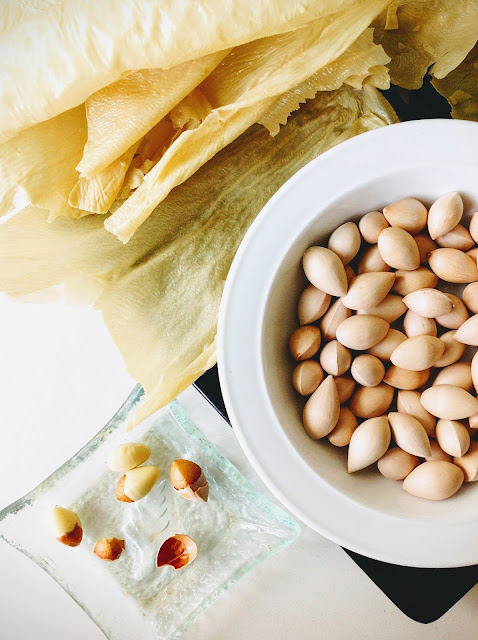 The ingredients:
A handful of raw ginkgo (I got some unshelled ones), about 50 nuts
Several sheets of dried soya skins (dried beancurd sheets), break into smaller pieces if too big
Honey rock sugar, about 80g (or adjusted to individual preference)

The cooking:
Crack open the ginkgo nuts to get the kernels out. Soak them in a bowl of water for about 20 minutes, remove the brown membranes then rinse and strain.

I like using the rice cooker for this, as there will be minimal watching required and there's no spilling over. Place the shelled ginkgo kernels in the rice cooker, fill water to about 80% full. Cook till the ginkgo is soft. I do like my ginkgo really soft so I've gone for about 1 hour and a half. The water will keep reducing so there's a need to keep adding more to maintain a healthy level. I like to have about 2/3 full by the end of cooking.

Next add in the honey rock sugar, stir till it's dissolved then add in the dried beancurd sheets. Gently stir around to ensure they are all soaked in the liquid. Once they are softened, turn heat off and keep stirring for a few more minutes. Leave it to simmer until cool enough to serve. 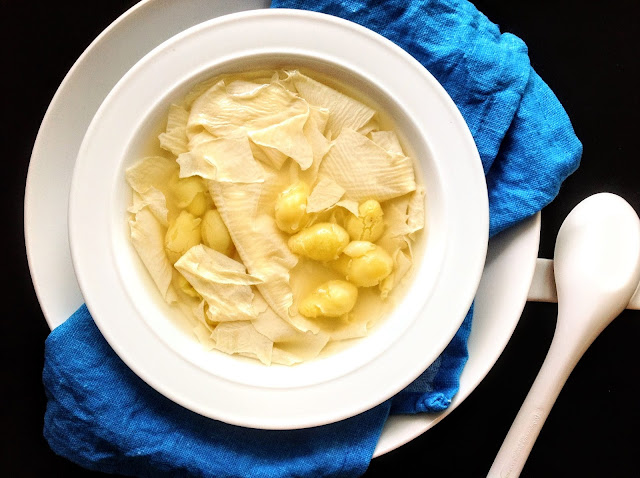 After having it hot, the rest will go chilling in the fridge and will be teatime, supper, snack, etc, for the rest of the day (or two).