Osmanthus cake (桂花糕) is a traditional Chinese sweet snack made with glutinous rice flour/rice flour with dried Osmanthus petals, but there is also a jelly version which is highly popular. Red goji berries and yellow bits of Osmanthus petals floating in the translucent jelly, makes a really pretty picture and just great for the Lunar New Year festival.

The Chinese believe that Osmanthus is a good for skin care food, especially in brightening and keeping skin youthful. How true it is - I have no idea, but I know that I do like its refreshing fragrance and taste.

We had tried making with agar-agar years ago, but I'm out of agar-agar so I took a packet of Konnyaku jelly powder from my sister and will try to make a wobbly Osmanthus jelly.

Get moulds ready before cooking because Konnyaku jelly sets pretty quickly and no one wants the jelly to be setting in the pan instead. I would divide 950ml of plain water into the moulds to decide on exactly how many moulds I need and how deep to fill each mould. This way I won't end up with uneven thickness or not enough moulds.

It was pretty simple, following the Konnyaku instructions on the packet; except I'd boil the water and the rock sugar together first, as rock sugar takes a while to dissolve.

Once the rock sugar starts to dissolve, add in the Osmanthus petals. Turn heat down to lowest and simmer for about 5 minutes. By now the Osmanthus would have released its fragrance and smells really nice.

Gradually add in the Konnyaku powder, keep stirring to avoid lumps till all is properly dissolved.

Add in the goji berries, stir to mix well. Heat off.

Slowly pour the jelly liquid into each prepared mould, making sure that the goji berries are evenly distributed in each. As seen here I've used a flower shaped silicone muffin pan, plus 6 used ice cream cups. It's advisable to have the moulds readily placed on a tray before pouring the jelly in, for ease of handling and transferring about.

Leave to cool and set for about 1 hour (usually sets in 30 minutes) then chill in the fridge until served.

To serve, just upturn moulds to press them out onto plates or dishes. As for the tall cups, press lightly around the base and knock it out. Note: soft moulds are much easier than hard moulds when getting jelly out. 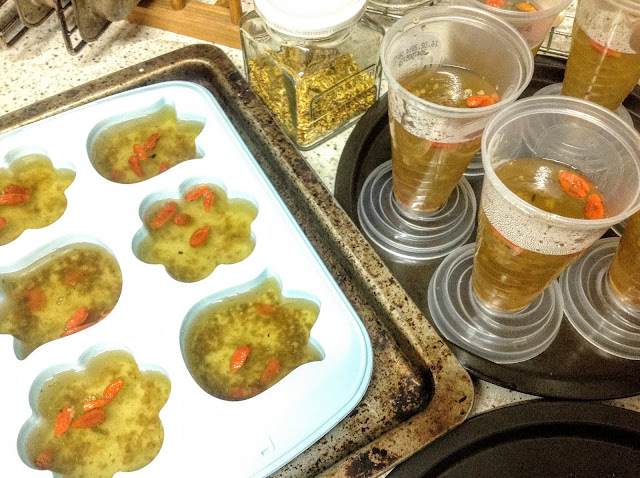 The amount of Osmanthus petals can be reduced to 1 teaspoon, but I do like the look of more bits floating in the jelly, and it gives a stronger flavour too. 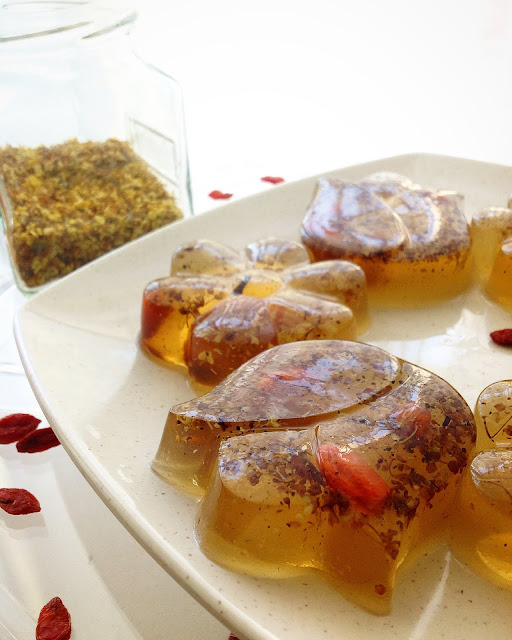 Osmanthus jelly tower made in the used ice cream cup, might be a challenge to eat this tall wobbly one 😀 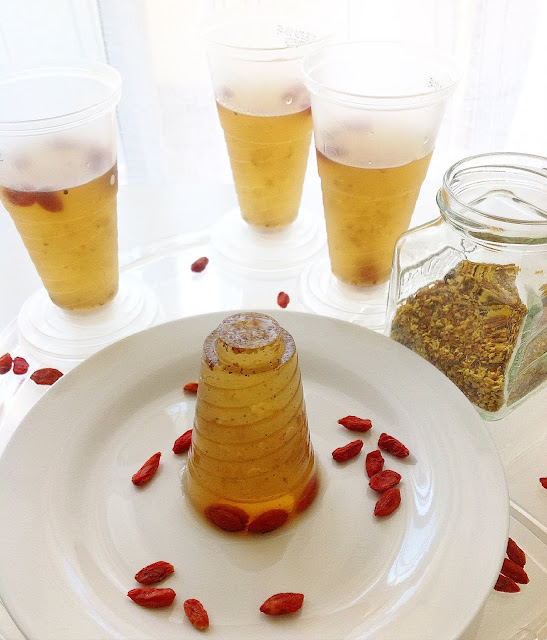 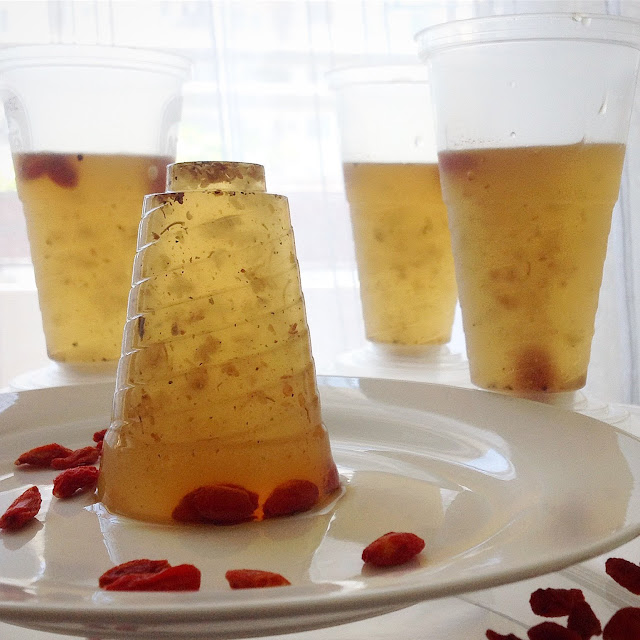 Here's to a new height in the new year!