Haven't been baking much bread since the pull-apart Christmas wreath buns, or rather I haven't been trying anything new in bread making. And we've been so preoccupied with all the Lunar New Year food there just isn't space to keep bread, even in the fridge. Now that the Lunar New Year craze is ending, we can start baking again as I'm really dying for some home baked bread.

When I made the pull-apart Christmas wreath buns, I had thought about adding some olives in them but for some reasons I decided not to. I should probably make a loaf of olive bread, or two. 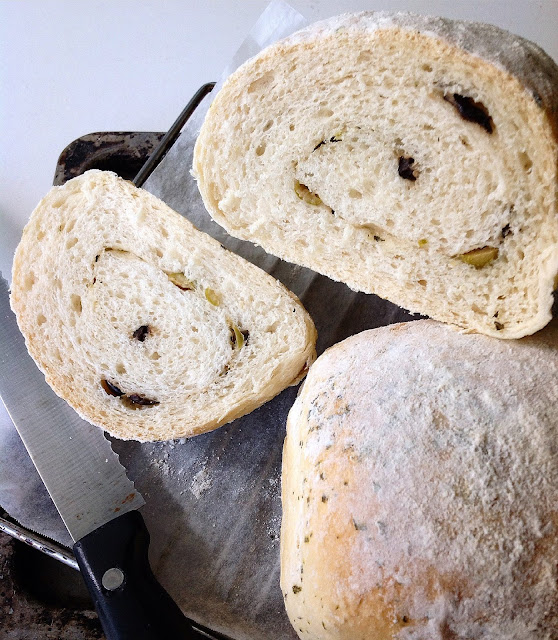 Mix the dry ingredients in a large mixing bowl, add in the oil then gradually add in the water whilst binding the flour together, slowly combine every bit into a dough before kneading it on a lightly oiled surface.

After about 20 minutes, the dough has become smooth and it's time to prove it. Lightly oil the same mixing bowl and place the dough in it. As I want to have an earlier bake, I've started the mixing and kneading the evening before so can leave it proving in the fridge. Instead of cling film, I've covered the dough with the cake stand cover which is tall enough to give room for the dough to rise without touching the top.

The next morning, the dough has been proving for about 15 hours in the fridge.

It's quite a large dough so my plan is to make 2 loafs of olive bread and 1 loaf of plain white bread. I've lined 2 separate ceramic roasting dishes (1 larger and the other smaller) with baking parchments.

Transfer the dough to a lightly floured surface, then knock back the dough by pushing it down with knuckles and the heels of the hands till it's formed into a rather flat square. Divided the dough into 3 equal parts; for the plain loaf, fold one long side into the middle, then fold the other onto the first fold; roll the dough over so that the folding seam is on the bottom, then tuck each end down to shape a loaf. Sprinkle some dried basil over and place this into the smaller roasting dish. Leave to prove for another hour.

For the other 2 parts, evenly divide and spread the chopped olives onto each flatted rectangular dough, leaving about an inch space all round the outside in. Slowly roll from the short side up, like rolling a Swiss roll. Turn the folding seam faced down then tuck each end down to shape a loaf. Sprinkle some dried basil over and place these 2 in the larger roasting dish. Leave to prove for another hour.

I'm still using the same method for creating some kind of steam in the oven, but with 3 loafs of bread in the oven at once, I've only had space for placing 2 ramekins (instead of 6) filled with boiling hot water at the corner of the oven whilst heating it up (I now find that having the ramekins of water at the same level works better than them being at the bottom of the oven).

Once the doughs are done proving, spray a little water over the top and follow with a dust of flour. I didn't do the scoring on the top this time as I've tried a couple of times without and they turned out fine. 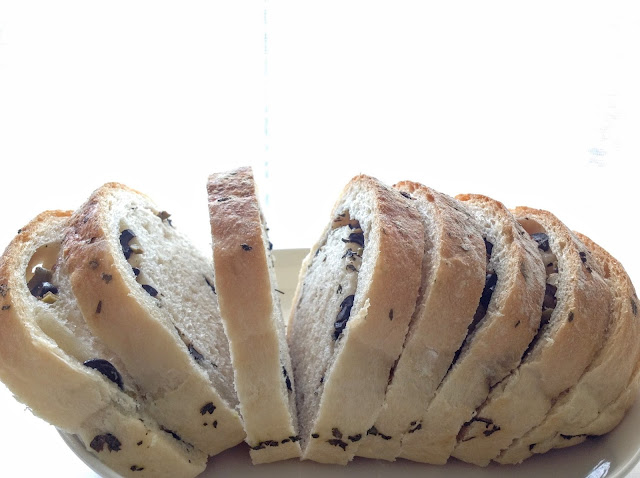 When baked, cool off on a wire rack. The bottom sounded hollow when tapped on. 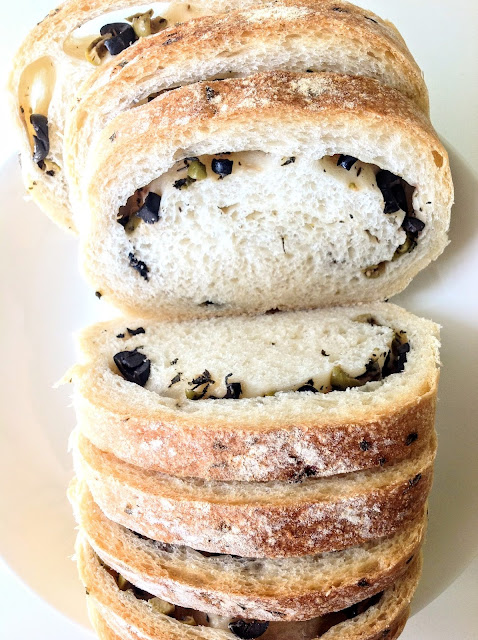 The outcome? Well I love bread and I love olives, so yes I can be biased 😁