Shortcrust Pastry - It Does Get Easier Every Time

For years I've been shied away from baking due to the many rules in temperature control, measurements, etc. I do remember the first time I tried baking some tarts with my cousin back in the 80s when we were teenagers: the process was so tedious and yet the tart came out so hard!

In recent years when I started to learn baking again, I tried to buy ready rolled-out shortcrust pastry to make pies but the taste is just not very natural. Not to mention that ready made shortcrust pastry in Malaysia is really expensive.

After reading and understanding a little more about baking, I decided to try making my own shortcrust pastry. And a few tries later, I finally managed to make my recipe an idiot-proof one. Turns out, it's not really that scary 😀

Preparation:
I find that there is no specific amount of water that must be used, as it could depend on the type of flour used and the humidity of the environment.

Placing the mixing bowl and utensils in the refrigerator before hand is my way to help keep the temperature low so that the butter would not get greasy too quickly. This really helps when you have to live in the tropics.

I usually break the dough and roll into a few smaller portions and wrap each in cling films. I prefer to shape them into ready-to-roll form (about an inch thick rectangles), and each portion is shaped to fit the storage box that I have. This way I can easily store them in the fridge separately and split the baking in a few different batches.

Also, when it's not stored in a ball shape, it can be thawed more evenly and quickly. And it's so much easier roll. 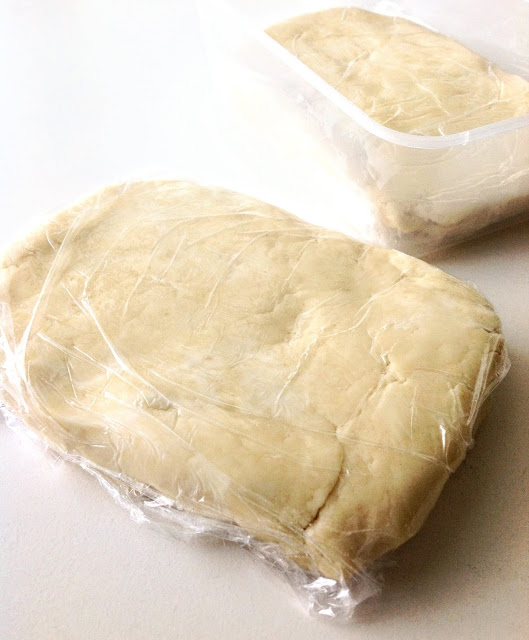 I sometimes freeze the dough for up to 3 months and it works fine, as long as it's left to thaw in the fridge then to room temperature before rolling.

I'm glad that I made the attempt to make my own pastry, as I can now make mince pies for every Christmas instead of buying them, and know exactly what I put into the baking.