We're having a little New Year's Eve dinner do with the family and we're meant to bring a little extra dish. As I'm still in a little Christmas mood, so I thought I'd try baking a pull-apart cheese & herbs bread - in the shape of a Christmas wreath. It's not Twelfth Night yet so I think we're allowed to keep the Christmas decor on, including food 😀 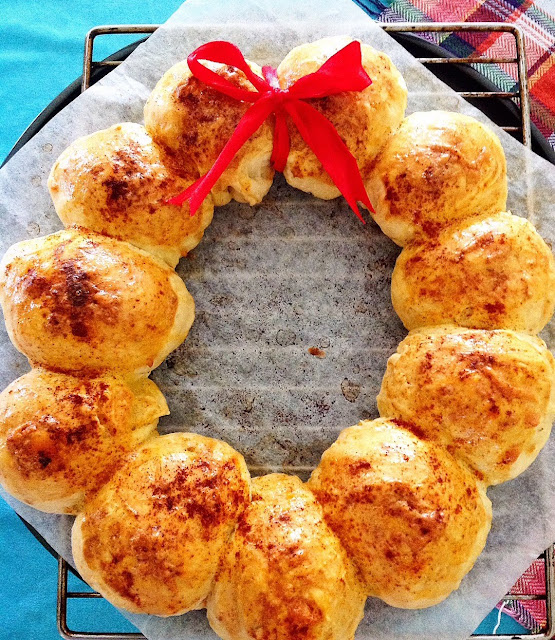 Being an amateur, I'm still adapting the recipe of the bloomer bread and mixed herbs buns I made months ago as they have turned out quite satisfactory. But as it's for special occasion, I'm going to add some cheddar cheese.

However, it's still somewhat a new experiment so I'm using a smaller portion of the ingredients:

Mix the dry ingredients in a large mixing bowl, add in the oil then gradually add in the water whilst binding the flour together, slowly combine every bit into a dough before kneading it on a lightly oiled surface.

After about 20 minutes of kneading, the dough has become smooth and it's time to prove it. I've lightly oiled the same mixing bowl and place the dough in it, then left it in the non-heat-up oven, for about 2 hours. Like the mixed herbs buns, this dough has risen quite nicely.

Transfer the dough onto a large non-stick baking tray (without flouring the surface this time, as there's more oil in the dough so it's easier to handle) then knock back the dough by pushing it down with my knuckles and the heels of my hands, till it's formed into a rather flat square.

Scatter the grated cheese over it and roll the dough up so that the cheese is sealed in. Roll it further to make the dough more compact, before cutting the dough into small portions then shape each one into a ball.

Line a large round baking tray (I'm using a pizza pan) with baking parchment and arrange the dough balls on it in a circular way, very close to each other. Prove in the non-heat-up oven for another 1 hour till they have somewhat doubled in size, by now the buns are attached to each other.

Heat the oven to 200ºC, with 2 ramekins filled with water in the inside corners of the oven. Meanwhile spray the top of the dough with a little water, sprinkle the extra grated cheese over them, then gently brush the top with the beaten egg.

Bake for 20 minutes, run a second coat of egg wash then sprinkle the paprika on top. Turn the heat to 180ºC and bake for another 10 minutes. Have reduced the baking time as these are a lot smaller than a normal loaf, and the mixed herbs buns did turn out slightly harder than I'd like it to be. 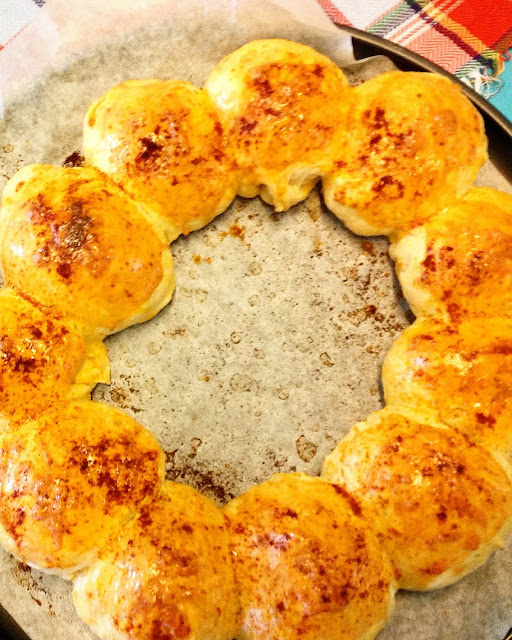 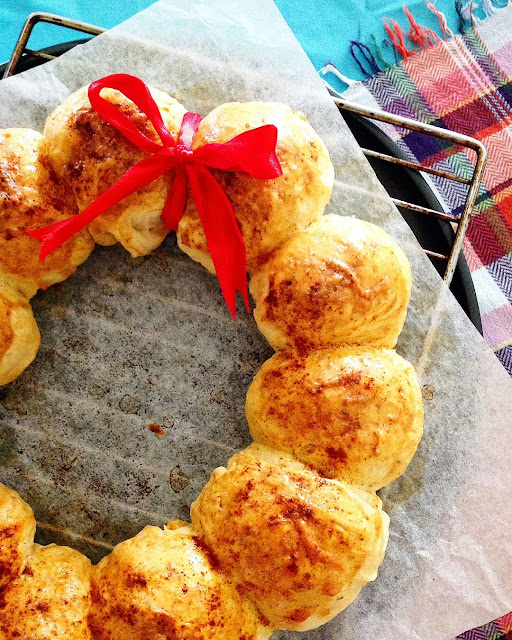 When it's done, cool off on a wire rack. The bottom sounded hollow when tapped on. When it's totally cooled, tie a red ribbon to complete the Christmas wreath look. It's absolutely optional of course, but I just did it for a little fun.

The crust is nicely browned with a shine, but as I didn't bake a little side roll for taste test so I was taking a gamble to see the results only when dinner starts. Thankfully, the inside turned out soft and fluffy, and the cheese flavour came through fine. I'm definitely going to make this again, and I wouldn't mind adding more cheese too 😊