For a couple of years I've been making Genoa Cake since watching the Bake Off Christmas special, with the recipe inspired by Mary Berry plus a few bits of my own adjustment particularly in the amount of sugar used.

More often than not, the cake won't be eaten on Christmas Day because everyone would be so busy with the roast dinner and the cake would be left lonely in the fridge over New Year then made its way into Chinese New Year. If anything, it does keep well especially when we keep it moist by adding a few drops of orange juice (sometimes a little brandy or rum).

But this year I've decided to challenge the recipe further - instead of a whole cake that takes up quite a bit of space in the fridge and takes a long time to bake (and no guarantee that it will come out good), I'd make mini ones. They require no cutting or slicing and can be stored separately or together - and probably look less intimidating to be eaten 😀

If we can buy smaller loaves from the shops, I don't see why they can't be baked in cupcake size. 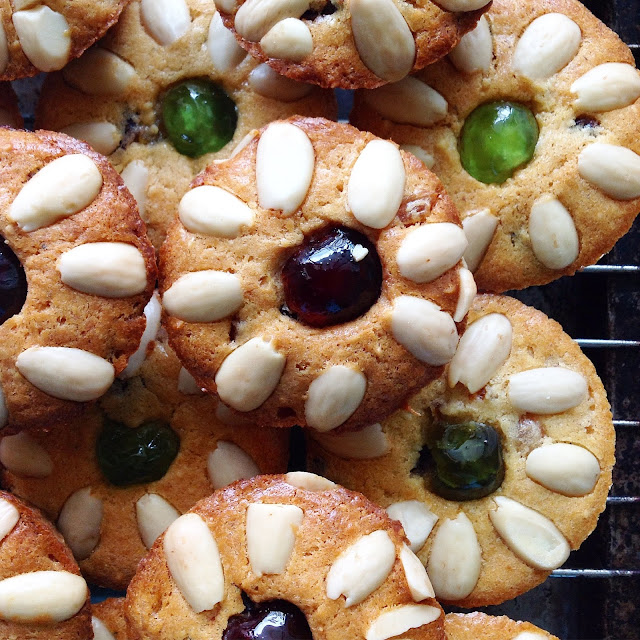 I am however, only making them with the ingredients readily available in our kitchen:

For decorating the top:
- Some green glacé cherries and some natural coloured glacé cherries, cut into half each.
- Some halved blanched almonds

Soak the mixed fruits overnight in the fridge (I have to do that in this hot & humid weather) with some syrup from the canned pineapple, added with 1 tablespoon of white wine vinegar. The liquid doesn't have to completely cover the fruit, just need to stir it around every few hours or so.

On the day of baking, separate the mixed fruits from the liquid and set aside.

Cream the butter and sugar in a mixing bowl till light and creamy. Mix in the beaten egg in a little at a time, with a spoonful of flour every time to avoid curdling caused by the egg.

When done with the eggs, gently fold in the remaining flour then the ground almond. Then followed by the mixed fruit (and nuts if using) till just combined.

Set the oven to 160ºC. Place a silicone muffin cup (can be baked straight in a paper cake cup too) into each muffin pan hole, divide the cake batter into each cup, then level the top as much as possible. Decorate the top with a halved cherry and some blanched almonds around it. 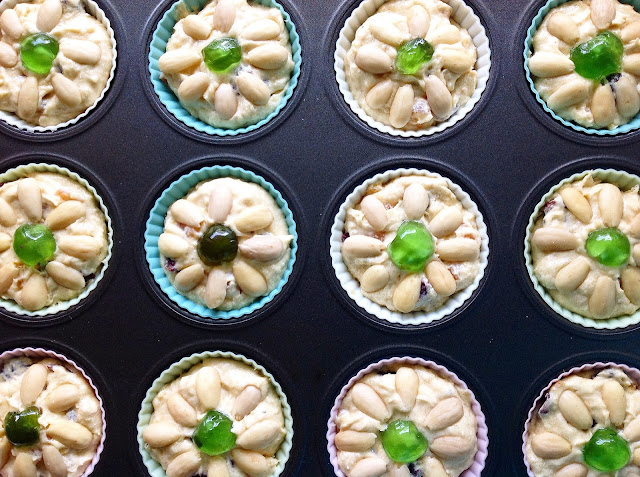 As this is a new attempt, I've set it to bake for half an hour and keep a check on them.

I'd check at 20 minutes to see if the top is getting too dark (which happened a lot with the old oven). If it is, I'll place an oven tray over the top of the cakes (leaving space in between, obviously) which will help prevent them from getting too brown too soon. When stick a skewer (or toothpick) in and it comes out clean, they are done. The total time should be about 35 minutes to an hour, depending on the oven.

Leave them cool for about 5 minutes before transferring over to a wired rack. And it's at times like this that I prefer to bake them in silicone cups because I can easily pick them out of the moulds and onto the rack without burning myself or destroying any of them. I will remove each one from the silicone cup after about 10 minutes of cooling.
Like a Genoa cake, these mini ones are not as fluffy as normal muffins or cupcakes. They have a slightly dense texture due to the rather heavy fruit content and use of ground almond. Nevertheless, they are moist enough. 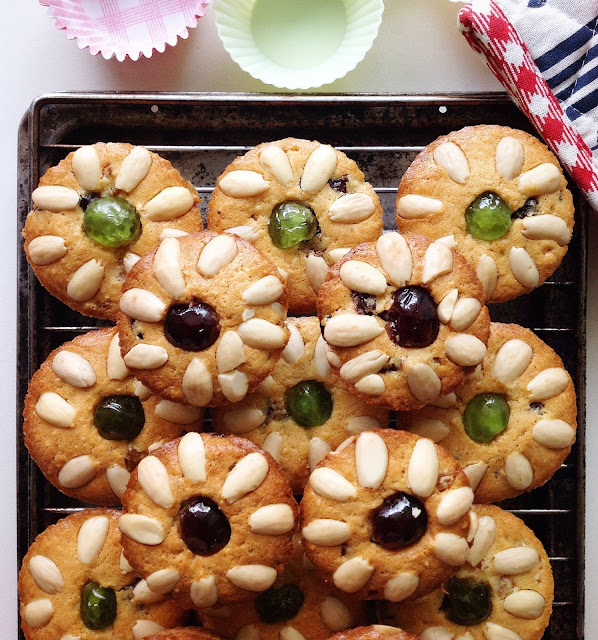 Leave them to cool completely before brushing them with a glaze of apricot sauce (if using). I made mine by adding a few tablespoons of apricot jam to the leftover liquid from soaking the mixed fruits, just heat the mixture on the stove on low for a few minutes or till thickened. Pour and press (with a spoon) through a tea drainer into its designated container, to get a smooth and shiny texture of the apricot sauce. 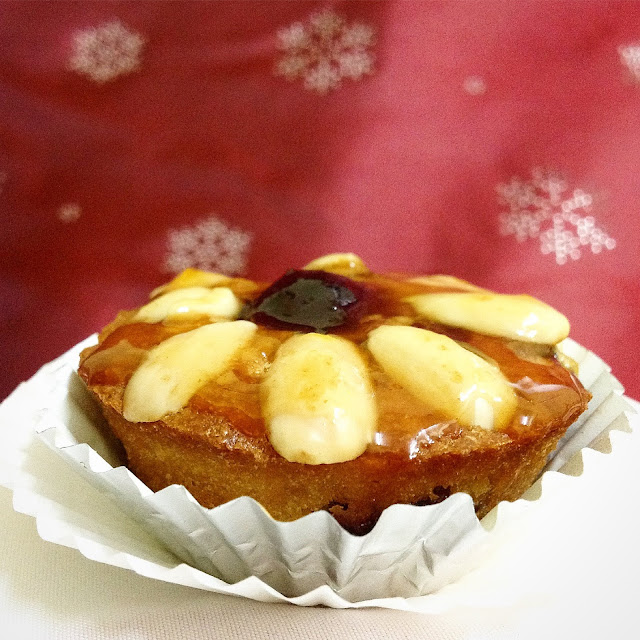