It's been a while since I've properly cooked, thanks to my extremely slow recovering cold and cough. I suppose the Red Date, Snow Fungus & Lotus Seed Soup did help a little. However, it's no miracle and besides rest, I still need to go to work and that doesn't help much!

Anyhow, the last batch of mini rolls I baked has come to an end and now that I've learned how to bake my own bread, the thought of eating a loaf of factory made bread just puts me off.

So even with my muscles still achy and throat still sore, I think a new batch of freshly baked bread is inevitable. 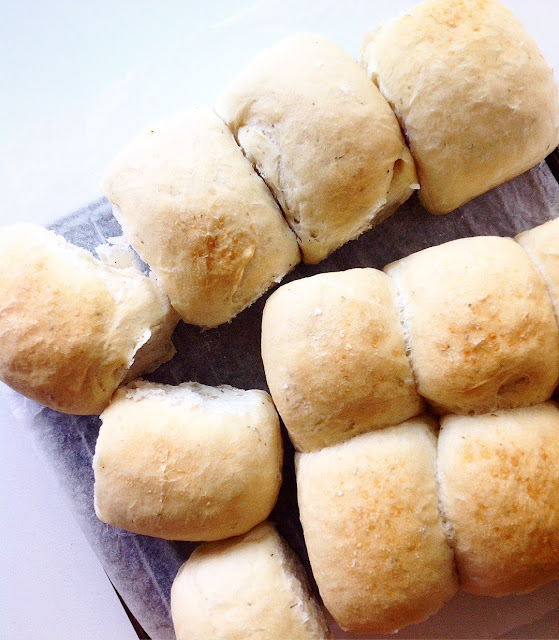 The mini rolls from the last bake became rather hard after chilling in the fridge, I'm thinking I've made them a little too small. So I'm going to make some further adjustment again this time (oh look at me getting all experimental!). I've opened a new packet of dried yeast (11g) but found out that there's actually only 9g, so the other ingredients have been readjusted based on that:

This time, I started by getting my fingers in the dry mixture, and make sure that any lumps of flour is broken down in the hope that the mixture is more even.

After mixing the dry ingredients in a large mixing bowl, add in the oil then gradually add in the water whilst binding the flour together, slowly combine every bit into a dough before kneading it on a lightly oiled surface. I'm using a large baking tray as we haven't a large enough proper worktop to do such thing. I do have to place the baking tray over a silicone sheet to stop it from slipping and moving about.

After about 20 minutes, the dough has become smooth and it's time to prove it. I've lightly oiled the same mixing bowl and place the dough in it, then left it in the non-heat-up oven, for about 2 hours. For some reason, this time it has risen a lot more than previous bakes. The only thing I've done differently up to this point would be the breaking down lumps in the bread flour, so perhaps that might have made the difference.

Using the same large baking tray, slightly flour it, then knock back the dough by pushing it down with my knuckles and the heels of my hands, till it's formed into a rather flat square. Divide the dough into 12 and gently roll each portion into a ball.

I've also decided to try using a different tray this time, which is a 10"x10" aluminium baking tray. Lined it with baking parchment, I arrange the mini doughs onto the tray in 3 rows, quite closely to each other, and left them to prove in the non-heat-up oven for another 1 hour till they have somewhat doubled in size.

I'm still using the same method for creating some kind of steam in the oven which is placing 6 ramekins filled with water on the base of the oven whilst heating it up.

Once the mini doughs are done proving, spray a little water over the top and follow with a dust of flour. After a few goes on tryng different baking time, I will now reduce the baking time to 10 minutes 200C + 10 minutes 180 C or at 190C for 20 minutes. As these buns are quite thin in thickness, baking them for a duration close to that of a thick loaf will obviously make them quite hard. You live and you learn... 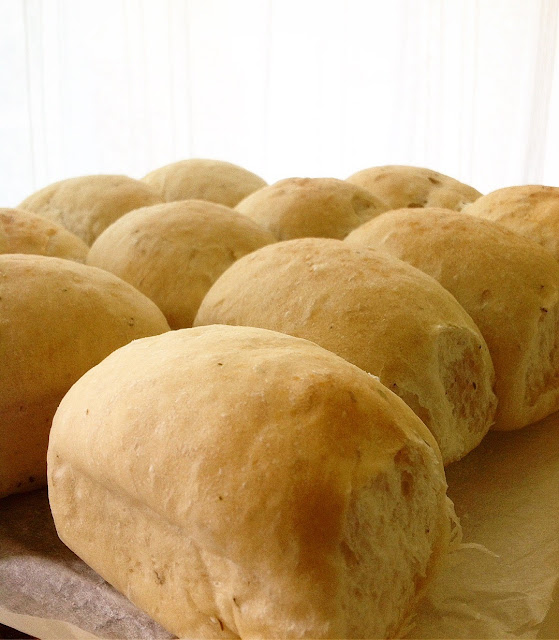 When baked, cool off on a wire rack. The bottom sounded hollow when tapped on.  The shapes are not exactly square because I had to squeeze 3 rows of 4 buns in a square baking tray, so obviously they're not gonna turn out square 😂

There is slightly more colour on the top than before, so the extra water spray may have worked?

The texture seems fluffier than the mini rolls, and I'm not at all surprised as I've seen how much the dough has risen. It could be the fact that I've mixed the flour better before adding in oil and water, or it could be because I've used a completely fresh pack of yeast; whatever it is, I'm just happy that I have some burger buns to survive on for the next week even though I'm still under the weather 😊