When I was much younger and still having McD's, I'd always discard the pickle or just ask to exclude it. Not that I was picky about vegetables but simply because that particular pickle tastes so horrible and has a really pungent smell to it. One would have to pay me (loads of money) to eat that stuff.

Only until recently that I've tried other pickled cucumber and realised that some of them can actually taste decent. We had bought several jars in the past but I thought I can try having some homemade, which would solve the problem of having too many cucumbers that we can't get through quickly enough and end up being wasted. 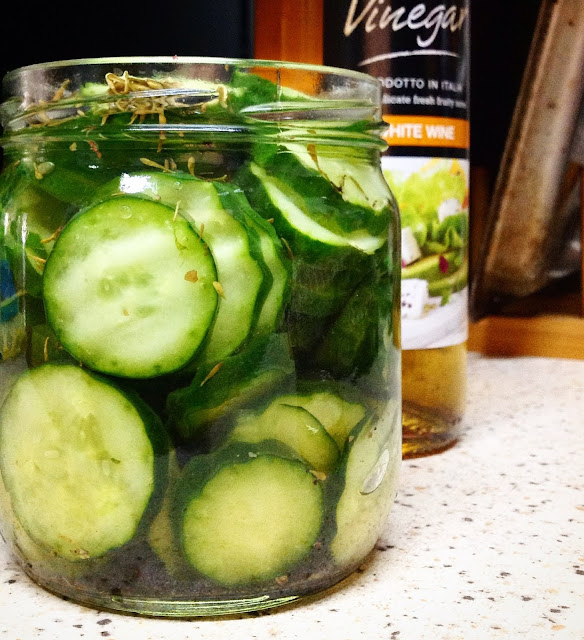 I have tried this quite a few times, and the result is rather pleasing.

It is pretty simple:

Slice the cucumber to about 5mm-thick slices (I like doing mine with a crinkled knife just for some fun shape), fill a jar (or two) with them.

In pour the boiling hot water, close the lid and gently shake it for about 20 seconds (absolutely do this with oven mittens on). Discard water. Thanks to this step, I don't have to sterilise the jar beforehand.

Add in the thyme and salt & pepper, then slowly pour in the vinegar to fill up to half the height of the content. Top up with some hot water to cover all the cucumber (this doesn't have to be boiling). Put the lid on then gently shake the jar in a circular way to make sure that the liquids are well blended.

Leave to cool then chill.

This Christmas, instead of a cheeseboard, we had some water crackers with some Scotch Whisky haggis and topped with a slice of this little pickle. Quite a joy hohohoho!