Creamy Gratin Cook Ahead and Freeze

To reduce the hassle of cooking and mess on Christmas Day so that I could less tired and perhaps even spare a little time chatting with guests, I've been trying to be more organised over the past couple of years. This include planning ahead and have certain dishes prepared ahead then can be heated up on the day itself within more reasonable time, such as freeze ahead Yorkshire puddings which were proven really helpful.

Although I don't like potato myself, it has always been a favourite amongst others. I have done roasties in the past but it's just so time consuming and I need to maximise the oven use for roasting meat. I then tried replacing roasties with a cheesy potato gratin and it went down really well too. So what I'm also going to do this year is a freeze ahead potato & cheese gratin. 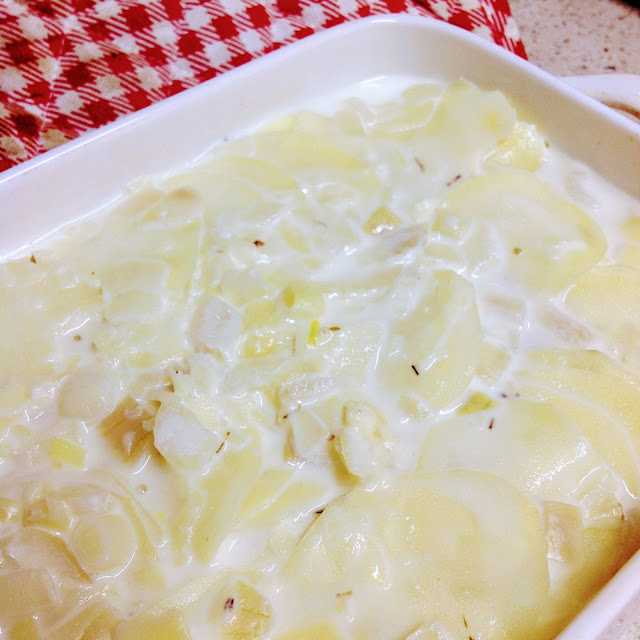 Instead of having it fully cooked then freeze/chill, then reheat, I'm going to just prepare it up till a par-boiled stage before freezing (or chilling if it's prepared just the night before). Potatoes don't freeze well raw but par-boiled ones do, and I have done so many times with homemade chips.

As I need to have the potatoes at a par-boiled form before freezing, I'm cooking this different from the usual way.

Using a large wok (I find this makes the stirring easier, and it's just the right size), add the cream, garlic, onion, bay leaf and thyme. Cook for about 3-4 minutes till onion is soft then pour in the milk followed by the salt and pepper.

Bring the mixture to just about boiling point, slowly add in the potato slices. Cook it for another 4-5 minutes, stirring slowly constantly.

The cream-milk mixture will thicken slightly through the process, due to evaporation of water content as well as the starch being released from the potato slices. By this time the potato slices will be soft enough but not breaking easily yet, turn the heat off.

Fish out the bay leaf. In a large deep baking dish, arrange the slices in a slightly overlapping manner, scooping the cream-milk mixture and onion & garlic over every layer, till the dish is filled up or the slices are all used. 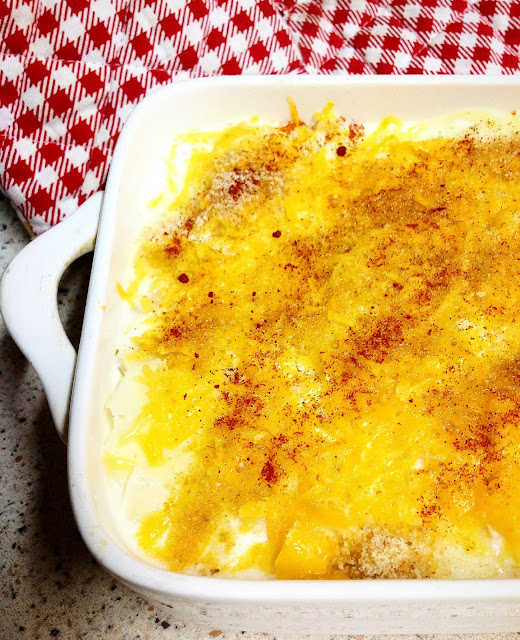 Since I have already seasoned the cream-milk mixture whilst cooking, it is tasting fine now so extra salt is optional. Cover the top with grated cheese then the breadcrumb, then add a sprinkle of paprika powder for a little of extra colour.

Leave to cool, cover with foil or clingfilm then freeze. When cooking, thaw it in the fridge overnight then cook in preheated oven at 210ºC for about 30-40 minutes or until hot & bubbly and golden brown on the top.