Just when I was thinking (for no reason) that I hadn't been feeling poorly for quite a while and how nice that was - the next thing I know, I've been attacked by a really bad cough all of a sudden. Knew i shouldn't have jinxed it!

Over the years, I have also realised that the pattern of me getting sick has changed. I used to first get a high fever and muscle pain, then sore throat and runny nose, then it will develop into a cough (or get better, when I was very lucky in very rare occasions). But of late these bad coughs seem to have just crept up out of nowhere, then the rest would follow in reverse order. This means that I won't have a way to observe the symptoms and get prepared for the next stage, because the moment I started coughing, I'm like a dead thing - completely useless.

I haven't been able to do much cooking since Thursday so I have been surviving on yoghurt and fruit, and the mini buns left from the last bake. I don't fancy going to the doctors for this because the prescriptions would usually include paracetamol and vitamin C which I can get hold of easily anyways, AND they've never made my cough go away! But one still got to have some food in even if it's not solid food. If this is something that could help me get better then it's a winner.

I remember having some snow fungus in the freezer for ages which I hadn't the chance to finish the lot just cooking for two. And Lord have mercy - I do have some goji berries, Chinese dates and rock sugar! It gets better: I happened to have also bought some fresh lotus seeds during the last grocery trip, I must've known something was coming.

Here's my big plan for a traditional Chinese cough remedy: red dates, snow fungus & lotus seeds soup (红枣银耳莲子汤). I have seen the older generations made it but this is the first time I'm making it myself. All I know (mostly told by my late nan) is: red dates are good for blood circulation, snow fungus is meant to have a nourishing function, lotus seeds are high in protein and potassium, while goji berries help boost the immune systems. And it's been known that this combination of soup is good for cough. Exactly how effective? I have no idea, but I'm sure it won't make me any worse. 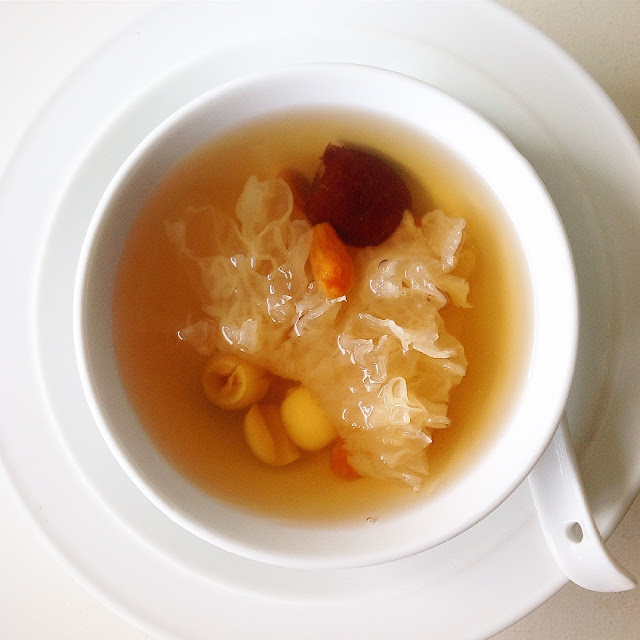 As I'm officially a sick person, plus the fact that I'm usually a lazy person too, I didn't even bother to weigh or measure the amount of each ingredients. They were just rough gauge of how much I could ingest at the end of the day.

All I wanted to do was to get the cooking over and done with so that I can go for a lie down, so in everything goes to the good old rice cooker, fill with water to the max level, lid on and press "on". 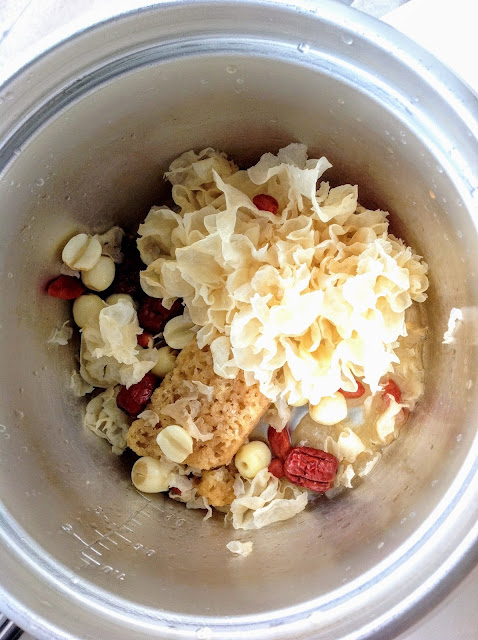 Just topping up the water at about every hour into the boil, I let it carry on for about 3 hours before I turned the heat off. Leave it to cool to below 40ºC before consuming, or it would defeat the purpose of it being a cooling and nourishing agent - not to mention that it would be pretty bad for the poor sore throat.

Due to my laziness, I chucked everything in to cook at one go and the tenderness of each ingredient varies: the snow fungus is still not as soft as I'd like it to be, whilst the dates and goji berries have gone a little too soft. The lotus seeds however, are just nice. 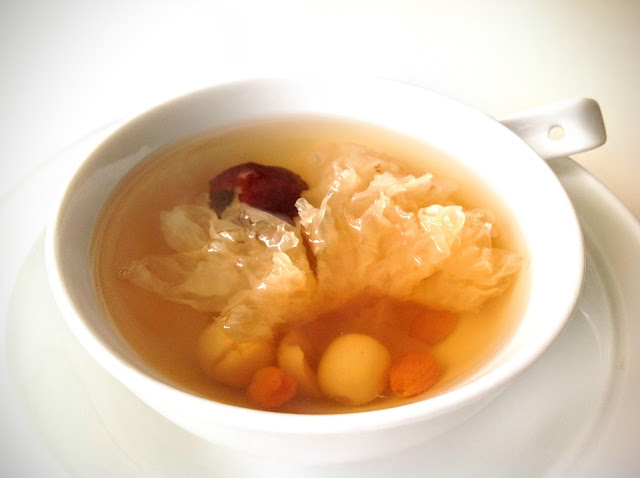 Lesson's learned, I will vouch for a better result next time. As for now, I shall just finish this lot and see how much better it;s going to make me feel 😷