Since I tried making bloomer bread, I've done it a few more times and I think I have got quite a hang of it now. Then my mind starts to stray a little and thought: can I possibly make a herby variant, and perhaps make dinner rolls or buns using the same recipe and save myself having to slice it all the time?

And what's the harm of it? We shall try. Last weekend, I went ahead and added herbs to the dough right before the second proving process but find it rather hard to get the herbs evenly distributed. I ended up having some buns heavily herbed whilst some having hardly any.

As we've just finished the last of the buns from that batch, I can't wait to have another go at it. This time, I plan to have the herbs added in from the very beginning.


So with what's remained in the pack of yeast from the last bake, I've use the following ingredients:

After mixing the dry ingredients in a large mixing bowl, add in the oil then gradually add in the water whilst binding the flour in with a fork. I don't think using hands would affect the texture like it does to my shortcrust pastry, but I just like to keep my hands dry for as long as possible.

Once the mixture is slowly sticking together, I start using my hands to combine every bit into a dough before kneading it on a lightly oiled surface. I'm using a large baking tray as we haven't a large enough proper worktop to do such thing. I do have to place the baking tray over a silicone sheet to stop it from slipping and moving about.

After about 20 minutes, the dough has become smooth and it's time to prove it. This time round, I've started really early in the morning so I let it prove in the lightly oiled bowl placed in the non-heat-up oven, for about 2 and a half hours. It has now doubled in size.

Using the same large baking tray, slightly flour it, then knock back the dough by pushing it down with my knuckles and the heels of my hands, till it's formed into a rather flat square. Divide the dough into 16 and gently roll each portion into small sphere.

Lined a baking tray with baking parchment, I arrange the mini doughs onto the tray and left them to prove in the non-heat-up oven for another 1 hour till they have somewhat doubled in size.

I'm meant to create steam in the oven whilst baking but there isn't enough space in our little oven to fit a roasting tin under the bread, so whilst heating up the oven, I've placed 6 ramekins filled with water on the base instead.

I have in the past been baking at 200ºC but the top has not been as brown as I'd like it to be. This might be due to it being a new oven and I just have to readjust until I get it right. So I've raised it to 220ºC.

Once the mini doughs are done proving, spray a little water over the top and follow with a dust of flour. Score each dough on the top to make a little slit, then bake for 20-25 minutes. 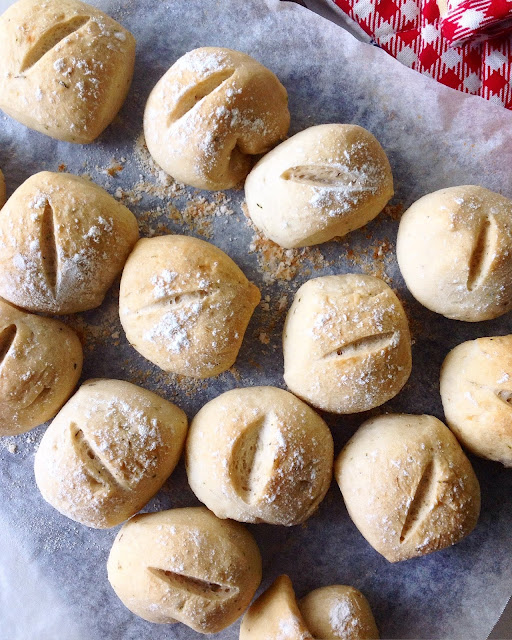 When baked, cool off on a wire rack. The bottom sounded hollow when tapped on. Obviously my shaping skills still require some improvement, as we can see here that the buns/dinner rolls are hardly the similar let alone identical 😂

I'm not sure if adding the herbs from the beginning has affected how the yeast works, but they are surely quite evenly found in each roll. Reducing the amount of salt has not affected the taste one bit, and the aroma and the taste of the herbs are coming through nicely so I'm not at all disappointed. These little ones have quite a crisp on the outside while still soft on the inside, and I do like a bit of crunch to my bread 😊