This was totally unplanned, but I accidentally, slightly cracked an egg this morning; but I wasn't going to cook eggs in anyway today. So I just had to make something with that egg just so that it won't to waste. There's still more than half a cherry and almond cake in the fridge, which means baking is out of the question. Then I remember a conversation we had last night about homemade egg noodles, conveniently, an egg was cracked.

Perhaps it was fated, or it was in my subconscious 😁. With no further questions, I've decided to make some homemade board noodles (block noodle/ban mian/pan me) although it is going to be a tedious process without a pasta machine. 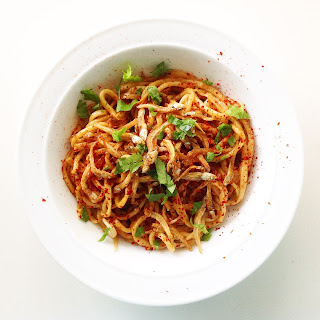 Board noodles, or block noodles (in Mandarin called BanMian and in Malaysia it's often written as pan mee) can be made into thick or thin noodles, or thin bite size torn pieces. I'm planning to cut each strand of noodle by hand since we don't have a pasta machine, and it was traditionally made by cutting the rolled out noodle dough using a wooden block like a ruler anyway. Exactly how, I'll play it by ear and go with the flow.

What I'm quite sure about are the ingredients, as I've done this with my auntie and my cousins before. 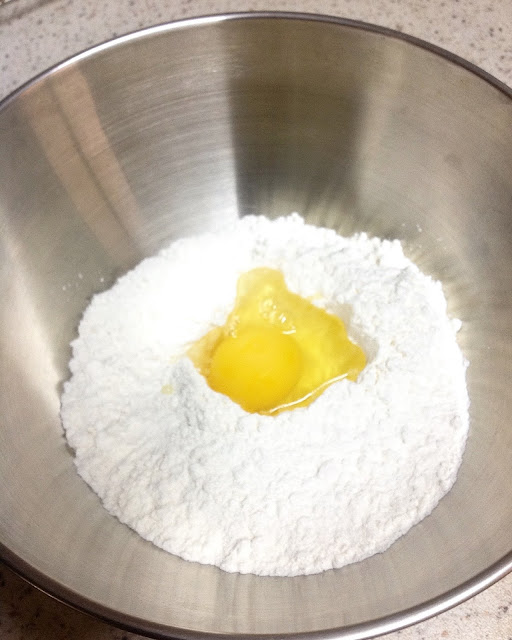 In a large bowl, mix the flour and salt together and make a well in the middle. Crack the egg into the well and add the oil with it. Lightly whisk the egg and the oil and slowly mix outward into the flour.

The mixture will become a coarse and flaky lump when the egg is no longer visible. Now little by little dribble in the water whilst blending the dough by hand, till all the floury bits are bound together. 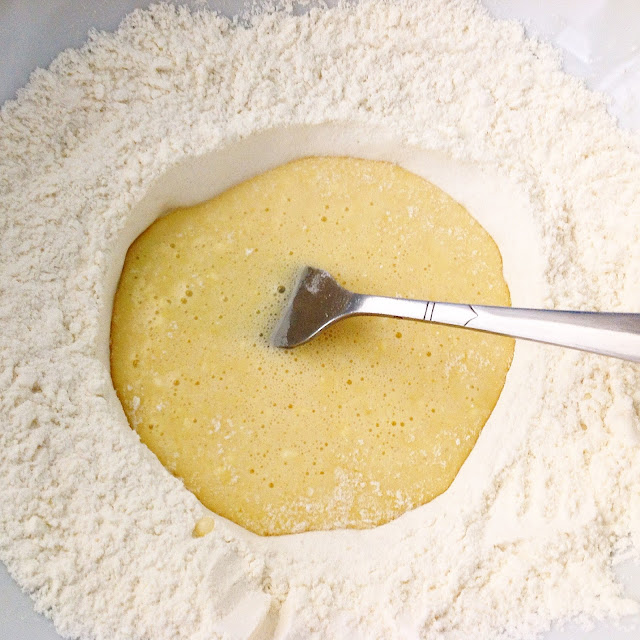 Knead the dough for a few minutes till it's rather smooth and stretchy. Divide the dough into 4 equal parts, keep 3 in the mixing bowl and cover the bowl with a damp tea towel to prevent the doughs from drying.

As we don't have a worktop that's spacious enough or with the right surface to do extensive rolling work on, I've been rolling most of my pastries on the largest chopping board I can find in the house but wasn't a good option. 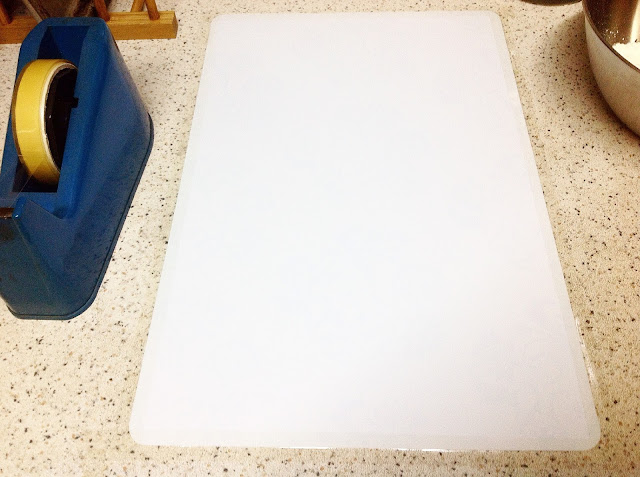 Today I thought of trying a new way which is taping a pvc table mat (cleaned and dried completely) onto the worktop. It turns out to be useful because the dough doesn't stick too much so I only needed to dust minimal flour.

Roll the dough into a rectangle about 1mm thick, dust both sides with a little flour before cutting. My cutting tools are an flipped-over baking tray and a pizza cutter. 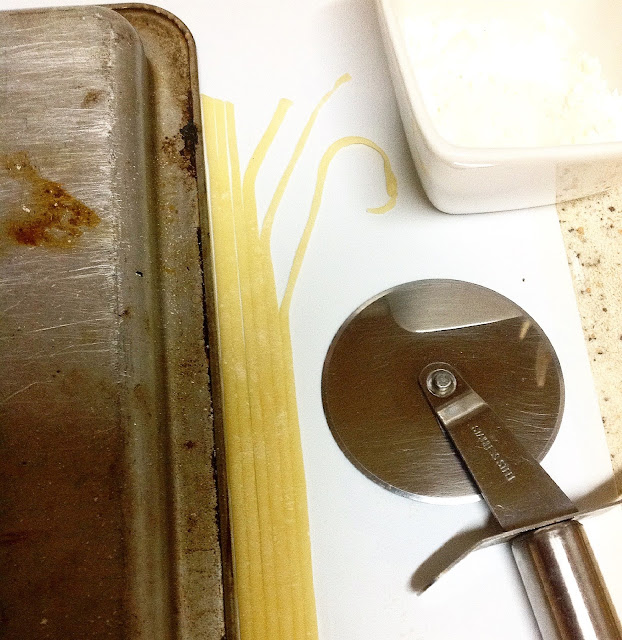 Using the baking tray like a ruler, cut the rolled out dough into thin strands of noodles. Pull them off the board and place them in another tray generously dusted with flour so they don't stick together. Whilst pulling the noodle strands off the board, they could stretch a little which is fine, as it would make the noodles thinner and longer. And it only means that the dough has got the right texture. 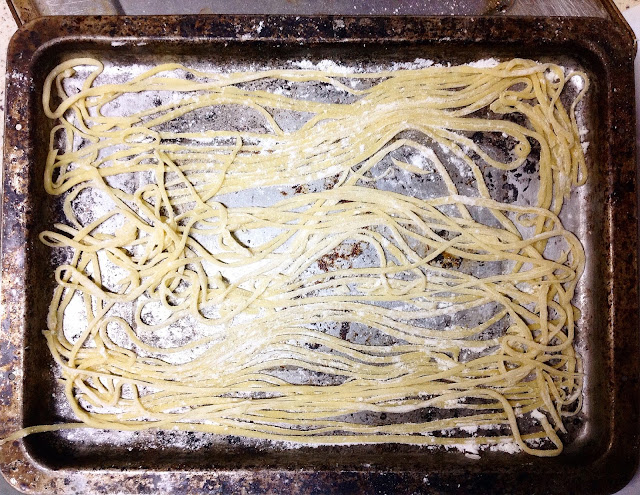 Cooking the noodles:
Bring a pan of water to the boil, put the noodles into water. Keep stirring with a pair of wooden chopsticks to prevent noodles from sticking together. Once the water starts boiling again, cook for about 2-3 minutes then drain away the water.

Then it's time to test the texture of the noodles. Ideally, it should be served with a lot more ingredients, but I don't have all of them in the house so I just have to settle with whatever I could get my hands on. Until I have the right ingredients to make a soupy banmian or dry banmian with mushroom, here's what I did:

Fry some dried anchovies (ikan bilis) in a little oil, scoop the anchovies out and set aside. Keep the oil for tossing the cooked and strained noodles in. Add a teaspoon each of dark soya sauce and light soya sauce, mix well. Sprinkle over some ground coriander seeds, chilli flakes, chopped parsley leaves and the fried anchovies.

The noodles cooked through fine. The texture has a little stretch to the bite but is not hard, which means I've got the right amount of kneading in the dough and the right thickness of noodles cut. 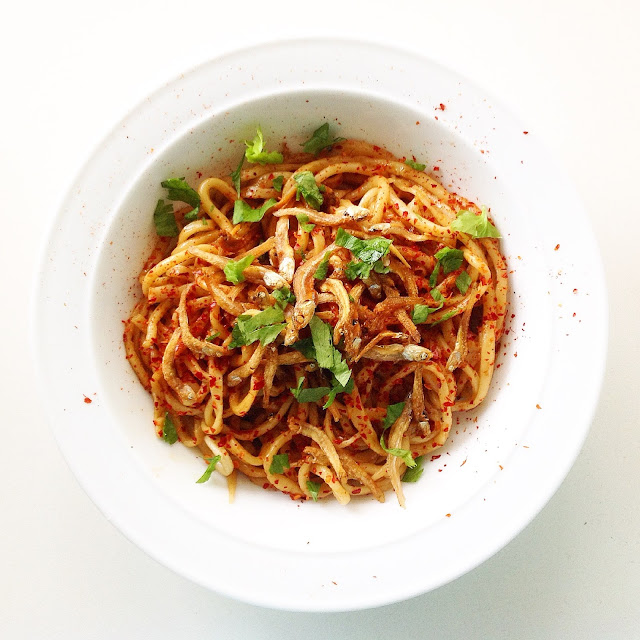 Storage:
Dust the uncooked noodles with more flour, divide them into serving portions and keep in airtight container in the fridge. They should keep for a few days if stored immediately after making. Just loosen up each portion a little before adding to the boiling water. 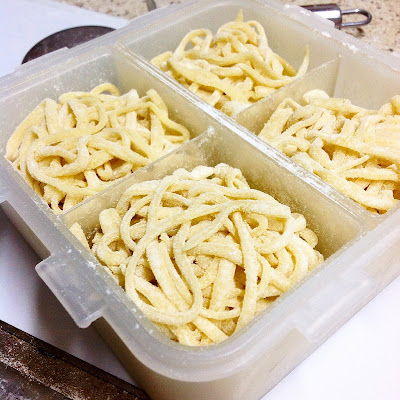 It was truly tedious, making it by hand; but the outcome is absolutely worthy of the hard work 😋