When I was at secondary school (middle school/high school), I was placed in a class where Home Science was replaced by the new subject Commerce. I was really jealous of my friends who were able to do all sorts of cooking and baking during class time, what's more, they get to eat them! They used to share some of their cooked food with us who could only smell it through the windows of our boring classroom 😢, thank you girls!

What I remember the best was something called Batu Karang (means coral) which tasted so good, and not until much later that I realised it was actually scones. For some reason, the scones that I've been buying from bakeries and shops just don't taste like the ones our friends let us try. I still love them, but at times i do find them a little too sweet, too sticky, or some may even carry an after taste of self raising flour (rather chemically). 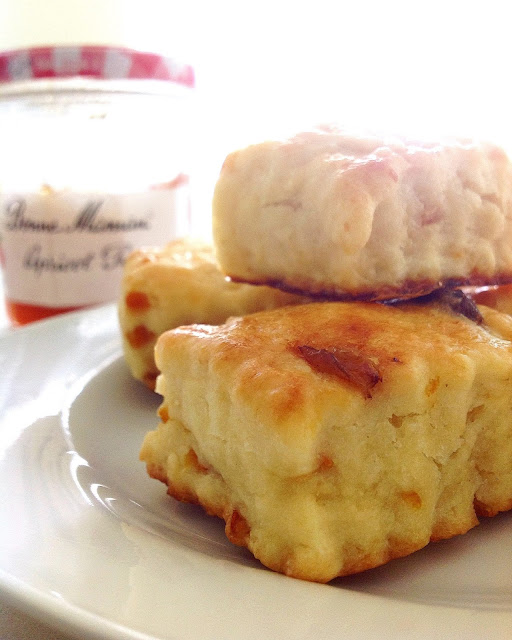 Since my favourite supermarket the Cold Storage has moved out of my area, I can't seem to find any scones that are acceptable in taste (although Cold Storage's are still rather sweet). I have concluded that if I want to have scones that are not too sweet, affordable, and don't taste like chemical, I will have to make some myself.

After doing some study on how scones are made, I understood the basic process: a little like making shortcrust pastry except for the ratio of ingredients (in shortcrust pastry, 1 butter : 2 flour; in scones, it's roughly 1:3). I believe I can manage it so I decided to give it a go. The worst thing that can happen: they may not rise as they should; the best thing: they still shouldn't taste bad. 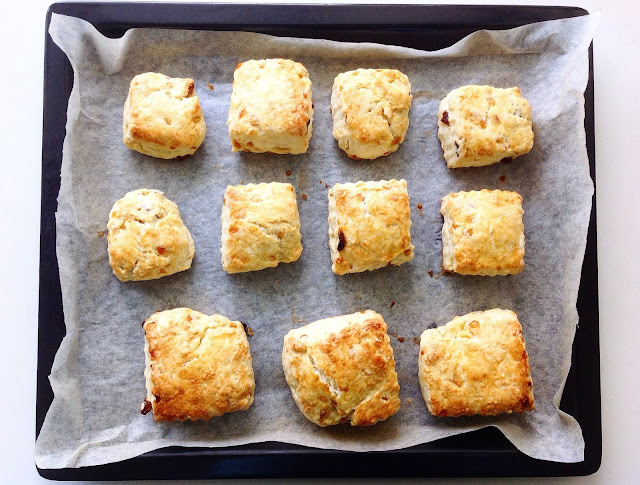 The ingredients (I made adjustment based on the weight of the butter I have):
100g butter
330g plain flour
2 ½ teaspoons baking powder
1 teaspoon brown sugar
A pinch of salt
170ml milk
30g of raisins + 30g of candied peel, soaked in 1 tablespoon of orange juice for an hour
1 egg for glazing, lightly beaten

I started of by taking the butter out and leave to soften in a large mixing bowl, early in the morning. From my experience with shortcrust pastry, it should be soften but still cold to the touch. If the butter gets too warm, it will affect the texture of the pastry.

Once the butter is soft enough to be cut by a butter knife, chop it into small pieces (which I find helpful for the crumbling process later)

Next is to properly mix all the dry ingredients in another bowl (I usually use the bowl that came with the electronic scale - really useful as I can just weigh everything at once) then add it to the butter.

Now, I've seen most chefs practise mixing by hand whilst some others suggest using a food processor for this step. As I don't have a food processor, the weather here is hot and humid, AND I have a rather high body temperature on a healthy day; so I've opted for a knife and a fork to mix the flour and butter to turn them into a crumbly mixture. This way I don't add any unnecessary heat to the butter which could melt it and make the mixture greasy, and I still haven't gotten my hands dirty up to this point 😆

Once the mixture is crumbly and airy, mix in the soaked dried fruits. Then pour in the milk gradually, and form a dough with my hands. This too, should be as quickly as possible, so that the dough is kept as cool as possible, and not overworked (otherwise the baked pastry will be hard). 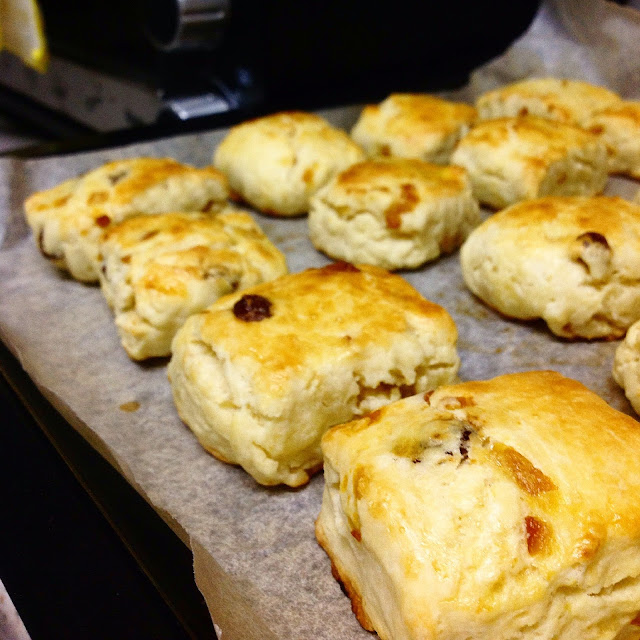 Cover with cling film and chill it in the fridge for about 30 minutes, then roll it out to about 2cm thickness. The usual way is to cut each one out with a pastry cutter/mould, but that would mean that there will be bits that need to be re-rolled and cut again. I'm hoping to keep that to a minimal so I've rolled it to be as rectangular as possible, and cut them into little squares (or rectangles) with a crinkle knife. The sizes varied from 3cm to 4cm but as long as they have similar thickness, they should cook evenly.

Arrange them on a baking tray lined with baking parchment, brush each top with some beaten egg, then bake in the oven at 180ºC for 15 minutes.

When it's done, cool them on a rack before eating. 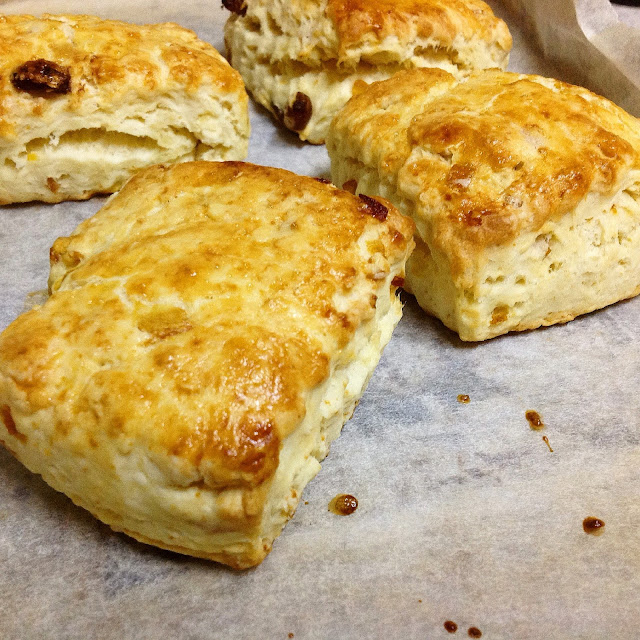 These mini scones have risen about 50% in size, and the texture is a lot less sticky than the ones I usually buy from the shops. In fact, they are quite spongy to the bite. I'm not sure if it's the amount of baking powder I've used, but I'm not sensing any chemically taste so I don't think it's too much. However, I believe I could try to reduce just a little in the next bake to see if it makes any difference.

Taste wise, they aren't sweet but there is sweetness provided by the dried fruits. After all, we are going to eat them with jam which is really sweet. I just don't believe that we need to make them sweet in the first place. For me, it's some butter melted on the hot sones, then spread with my favourite Bonne Maman preserves 😍😋

With these ingredients, I've made 14 mini scones which may cost about 10p each (I did a rough calculation haha). Once they are completely cool, I can store them in an airtight container in the fridge. When I want to have it, I'll slice it, heat it in the oven for a few minutes before spreading butter or cream. Or I could just leave it to go down to room temperature.

Till the next bake, these should last me a while.