Was checking the freezer today, there's some pork mince leftover from making the Japanese stuffed cabbage rolls, and half a pack of beef mince. I thought I'd make some meatballs as a treat, just to reward myself for baking my first loaf of bread successfully 😀

However, I'm going to make a creamy, cheesy spinach sauce to go with it instead of the usual tomatoey bolognese, simply because I'm not a big fan of bolognese at all. And you really don't get this combination elsewhere easily, so why not?

I'll keep saying this: eat how you like it, you've only got yourself to please 😉 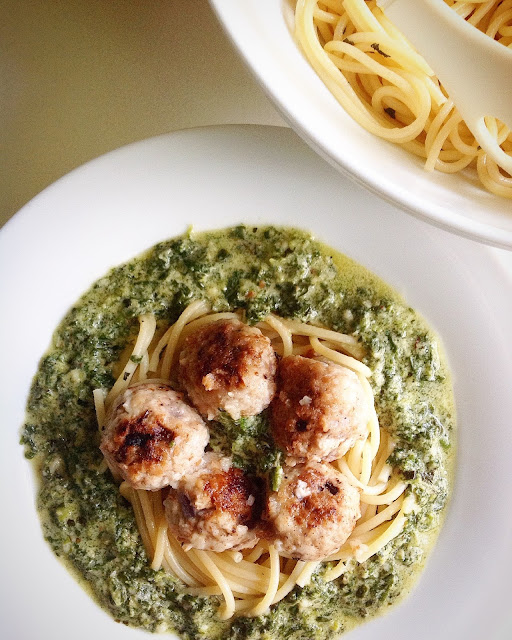 The ingredients were based on the leftover minced meats.

My way of making meatballs, is to just mix everything together and roll into a large ball, then chill it for about 30 minutes before rolling it into bite size meatballs. This helps as we're in really hot and humid part of the tropics. I don't usually cook the onion prior to adding it to the meat mix, as I do like a bit of a crunch in the bite. And I get to reduce the amount of oil used in the process.

But before chilling, I'll pick a little bit off the meat mix, like half a teaspoon of it, to fry it in a little hot oil in the pan. This is to see if it tastes alright.

Once I'm done dividing and rolling the meat balls into bite size, I'll dip each one in the beaten egg then roll in the plate of breadcrumbs. Heat some oil in a frying pan and shallow fry them for about 5 minutes, turning over each meatball every now and again to get an even heat on all sides possible.

Fish them out and leave them in a plate lined with kitchen paper towel or baking parchment to soak out extra oil, and for use later.

In a saucepan, heat the basil and garlic in the oil on low heat, stir in the flour and mix into a smooth paste. Add in the cheese and stir till it's melted, turn off the heat. Immediately add in the chopped spinach and stir gently to blend it together. This will prevent the spinach from being overcooked and turning brown. The whole sauce making process would take less than 5 minutes.

Once the spaghetti's cooked and drained and oiled (usually with the oil that came with the feta cheese or artichoke in oil), plate it, meatballs and sauce on, followed by a sprinkle of salt, pepper and chilli flakes.

The leftover meatballs? Just chill them in the fridge for at least an hour then freeze them in an air-tight container, this way they are less likely to stick together (due to condensation). Alternatively, freeze separately by meal portions which would make future cooking much easier.

To have them again, just thaw them in the fridge before cooking/heating:
- quick fry for a few minutes
- steam for about 10 minutes
- cook with sauce of your choice