Probably no one would want to know, but recently our dear oven has ceased functioning as an oven after serving us for 4 whole years; which means that I'll have to settle for other cooking methods, such as: steaming! And that's the reason why my latest venture is this Cantonese rice noodle roll. It is called 肠粉 (chang fen) or 猪肠粉 (zhu chang fen) in Chinese, also called Chee Cheong Fun (the sound in Cantonese) in Malaysia. 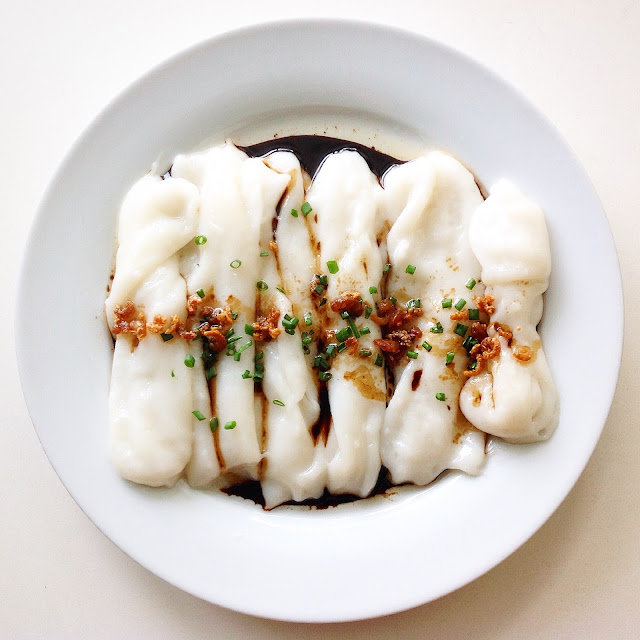 A big part of my family is of the Cantonese root, so this has been a very common dish to us. In fact, two of my aunties from different sides of the family ran a rice noodle business respectively. As a kid, I used to go to one of them to get freshly steamed rice noodle rolls dribbled with onion oil and soya sauce, and I can still remember that heavenly taste.

So I've got my steamer ready, and started my adventure with the home cooked rice noodle rolls.

The ingredients are pretty simple: rice flour, wheat starch, corn flour and water. However, I can't get any wheat starch at my local shops so I've tried substituting with some tapioca flour.

The first attempt got me a rather sticky and chewy texture, which I believed I'd used too much tapioca flour. After making some adjustment on the ratio of the flours, the second time gave me a less sticky and less chewy result, and the taste of rice came through more distinctively. 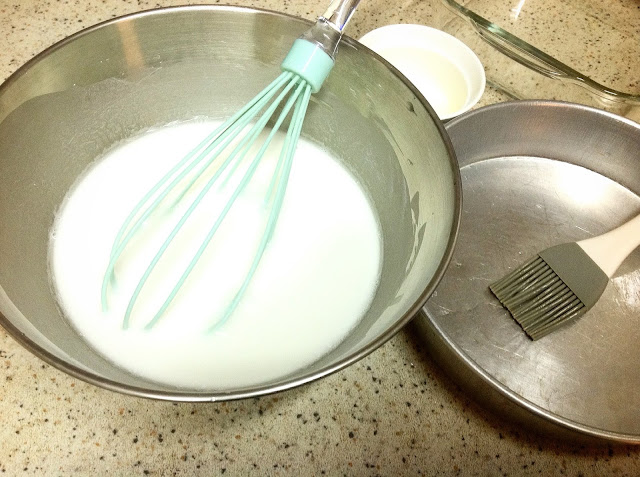 After adjusting and readjusting the ratio of rice flour : tapioca flour for 4 times, I think I'm pretty close to the texture I like - with my own alternative ingredients combination that is. (Usually, wheat starch is also called for the recipe but I can't seem to find it, hence the experiment)

Having practised for 4 times, I'm getting quite a good hang of it now and I can say that it's not as difficult as I thought it would be 😄

The first thing I do is to get the steamer ready, to start boiling the water. It has to be as big as you can get because you'll need to fit another dish inside it. Mine is of 28cm diameter.

Then get the dish ready for the rice batter, and I've used a square Pyrex baking dish because that's the only thing I can find in the house that can fit inside the steamer. And you'll need something that has a flat base.

Mixing the ingredients is really easy, just place everything in a mixing bowl and mix well. I just have to make sure that I stir it well again every time I want to use it, as these flours don't bind with water and will separate then sink to the bottom once left still.

Next, lightly brush the baking dish with some oil, on the base and halfway up the sides. This will make getting it out easier.

Once the water in the steamer starts boiling, scoop a ladle full of the rice batter (mixed well first of course) into the dish, and place the dish inside the steamer. Steam for 3 minutes, there will be visible air bubbles pushing up from the bottom of the cooked noodle.

Take the dish out with a hot dish clip. Using a scraper (I use a silicone cake spatula, just whatever I can find in the kitchen), slowly roll the noodle up from one end to the other, whilst tilting the dish so that it helps the noodle to roll down easier and can be pushed out onto the plate.

For the sauce, I shallow fried some chopped dried shrimp in a little oil and dribble over the rice noodle, followed by some light soya sauce and topped with some spring onion. Or, I could just have it with some sesame oil and soya sauce, or chilli sauce, or black bean sauce, or... you name it, it just goes with anything! That is why, although I've been "rice noodled-out", I'm still not sick of it yet.

I believe I could still improve it further, or eventually make it with wheat starch if I can find it, but till then, this is my best bet. I might even cooked it with added ingredients such as dried shrimp and egg 😉