The first time I tried making a loaf of simple bloomer bread, everything seemed to have gone well, then halfway through baking, I realised that the lower heat of the oven stopped working. Needless to say, that didn't turn out to be a very nice looking loaf at all - although I did manage to "cook" it so that I can eventually eat it as I really didn't want to waste it.

Now I finally got a new oven after 2 whole weeks of sans baking life, I thought I'd better use up the remaining yeast in the pack before it became less effective. Reason being, in Malaysia instant dried yeast is sold in sachets of 11g (and not 7g like in the UK) and every bread recipe I've read calls for 7g yeast. So for the last bread attempt, I had to measure out 7g and kept the rest in the freezer. 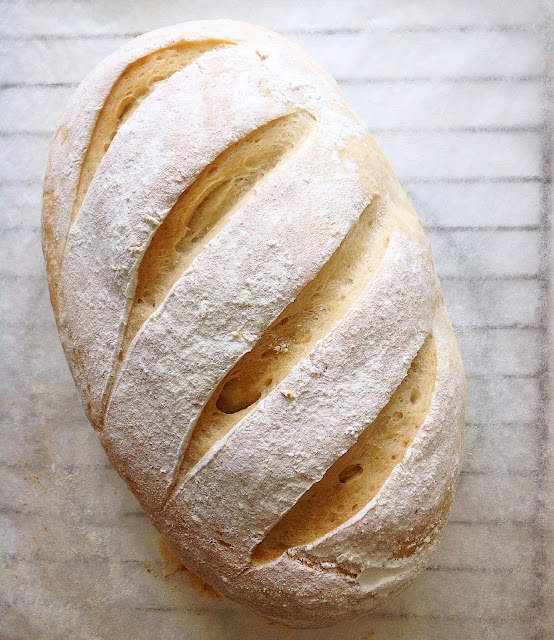 This time, I had to recalculate the amount of flour since I'm only using what's left in the pack of yeast which is 4g:

After mixing the dry ingredients in a large mixing bowl (I even did the Paul Hollywood method by adding the yeast on one side of the flour and the salt on the other 😁), add in the oil the gradually add in the water whilst binding the flour in with a fork. I don't think using hands would affect the texture like it does to my shortcrust pastry, but I just like to keep my hands dry for as long as possible.

Once the mixture is slowly sticking together, I start using my hands to combine every bit into a dough before kneading it on a lightly oiled surface. I'm using a large baking tray as we haven't a large enough proper worktop to do such thing. I do have to place the baking tray over a silicone sheet to stop it from slipping and moving about.

After about 20 minutes, the dough has become smooth and it's time to prove it. I started it quite late in the day so I place it back in the mixing bowl and cover it with cling film, then left it in the fridge till the next morning (all in about 14 hours).

I took it out in the morning and the dough has probably risen about 40% in size. I then left it in the oven (not turned on) for another few hours where it continued to rise further. When it went back to room temperature and the size has risen further, I then took it out to prepare for second proving.

Using the same large baking tray, slightly flour it, then knock back the dough by pushing it down with my knuckles and the heels of my hands, till it's formed into a rather flat rectangle. Fold one long side into the middle, then fold the other onto the first fold; roll the dough over so that the folding seam is on the bottom, then tuck each end down to shape a loaf.

Lined a baking tray with baking parchment, I placed the loaf dough onto the middle of the tray and left it to prove in the non-heat-up oven (that's the only space in the kitchen suitable for this) for another 1 hour. The size now has almost doubled (not sure if it's the yeast that's become less effective or what).

I'm meant to create steam in the oven whilst baking but there isn't enough space in our little oven to fit a roasting tin under the bread, so whilst heating up the oven, I've placed 6 ramekins filled with water on the base instead. 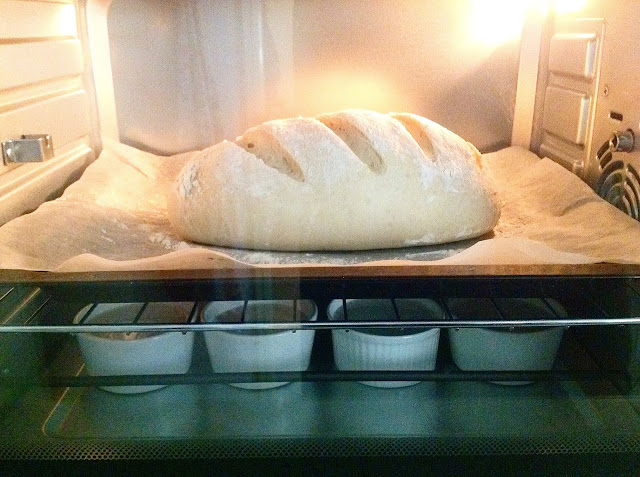 Baked in the oven for 25 minutes, then turn the heat down to 180ºC and bake for another 15 minutes. Once it's baked, remove from the oven and leave it to cool on a wire rack. Obviously I've been following what most recipes have suggested, but I think in future I may need to try adjusting either the heat or the baking time if I'm aiming for a browner crust.

Nonetheless, the bake seemed Okay, and the bottom sounded hollow when tapped on. But most importantly, I tested on a tiny slice - it is absolutely edible! I can't wait to have some for breakfast tomorrow with some jam and butter. 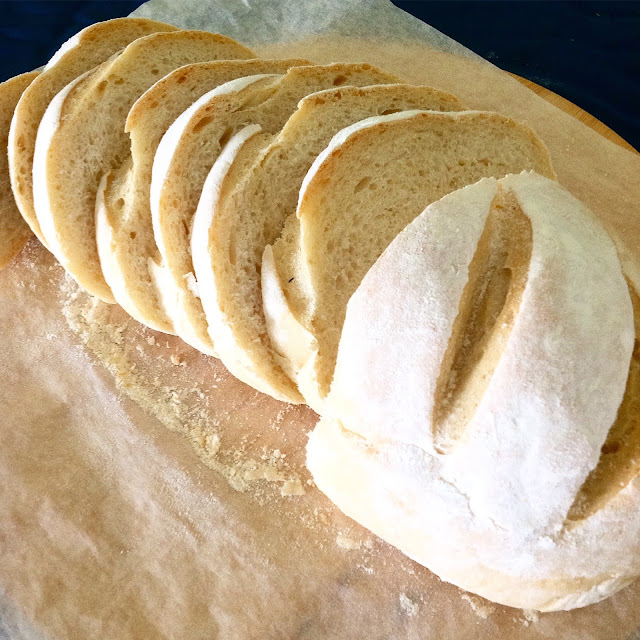 Whilst I enjoy my first ever successful loaf of white bloomer bread, I can now look back at what turned out when the oven broke 2 weeks ago, and laugh 😀