It's officially autumn now, which means the next festival on the Lunar calendar - Mid Autumn Festival - will be here soon. Also commonly known as the Lantern Festival and Mooncake Festival, it is a day (or in present days, month) where the Chinese enjoy good food and light up colourful lanterns whilst watching the brightest full moon of the year.

In this present commercial world of capitalism, by the 1st day of September, mooncakes are already on sale in all shops in most Asian countries; while the actual day of Mid Autumn Festival falls on October 4th. I do like the mooncakes, but my ultimate favourite are the "piggy biscuits" (猪仔饼) made of plain Cantonese style mooncake pastry without the fillings. These cookies/biscuits were originally the outcome of pastry testing in the old days. As they were usually made in the form of little pigs, hence the name; although they have evolved to many other shapes over time, such as fish, flowers, and all sorts of gods/goddess figurines (公仔饼).

A late great uncle of mine was a Chinese restaurant owner and they used to have their own line of mooncakes. As a child, I was allowed in the kitchen from time to time and I remember watching the whole process of mooncake making, which was a real treat.

Since mooncake prices have sky-rocketed recently (well, for the past few years), I've decided to not buy any this year. I won't go as far as making mooncakes at this point, but I thought I could have a go at making the "piggy biscuits" (猪仔饼). I can treat this as a major "pastry testing" exercise. 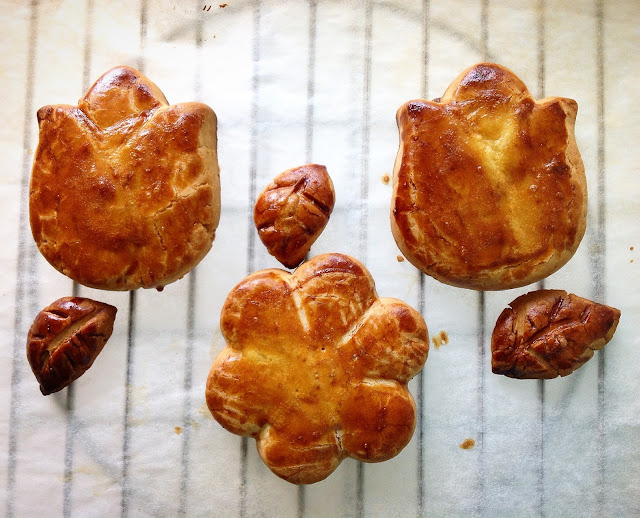 I did have to make a lot of adjustments since I don't readily have golden syrup and alkaline water in the house, so I've substituted golden syrup with Lyle's Butterscotch Syrup (just so I can finish it off) and made the alkaline water by mixing 1 part baking soda with 3 parts of water. Also, my main aim is to make my own version that's less sweet.

I had 3 goes, with different portions of ingredients, methods and baking time:

As it is suggested that they need to rest overnight to soften, I only tested the biscuits the following day.

The result: a little hard, but tastes fine. At this point I gathered that perhaps when I reduced the syrup, it's also affected the softness of the pastry. I'm thinking, maybe I'll need to add some other liquid based ingredients to make up the reduced 40ml of syrup.

I applied the same method as the first time round: syrup + milk + alkaline water into flour, then oil in, then mix.

The result overnight: still a little on the hard side, and I've probably messed up the baking time so they are slightly burnt on the bottom. No photos for these little flowers then.

I do find that in the first 2 trials, the dough seemed a little dry, and from what I can remember from my childhood memory watching my great uncle's chef, the dough was very soft. I decided to try a different method suggested by some other recipes I've looked at, which is to blend the wet ingredients first, before adding in the flour.

Method:
The result:
They are actually rather soft on the touch, just minutes out of the oven, and a couple of them have cracked a little on the side so I'm thinking I have either messed up on the alkaline water or simply have to reduce it the next time.

Taste wise, absolutely fine. I believe I could probably still reduce the syrup slightly further and make up with milk, since the softness has not been affected this time.

I'm sure there are still loads to be adjusted and improved on, but I have used up the last drop of my Lyle's butterscotch syrup so the next mooncake cookie experiment may have to wait.

Till the next bake... I'm going to enjoy my tulip and daisy shaped mooncake pastry cookies.