Bake Your Own Soda Bread at Home

Recently I've been thinking of have a go at bread baking at home. I was a little too ambitious and thought that brewing my own sour dough starter was a good idea. It all started off well, but on the 3rd day the starter would stop to react or generate bubbles.

It could be due to the highly humid weather, or I was just simply doing something not quite right. After 3 attempts at the sour dough starter, I gave up. Then I found out about this other bread baked without yeast, which is the soda bread. I've read about it, and watched all the celebrity chefs' videos I could find: Paul, Jamie, Hugh; you name it.

Looked like something that's achievable, as it's risen by the chemical reaction between the acid (buttermilk) and the alkali (baking soda). But just 1 big problem: it's extremely hard to find buttermilk in Malaysia, and when I found it, it's extremely expensive. One of the reasons to bake at home, apart from being able to have control over the ingredients, is to save money. Adding a £4 buttermilk into baking a loaf of bread just defeats the purpose, and to what I know, soda bread is definitely not a luxury! 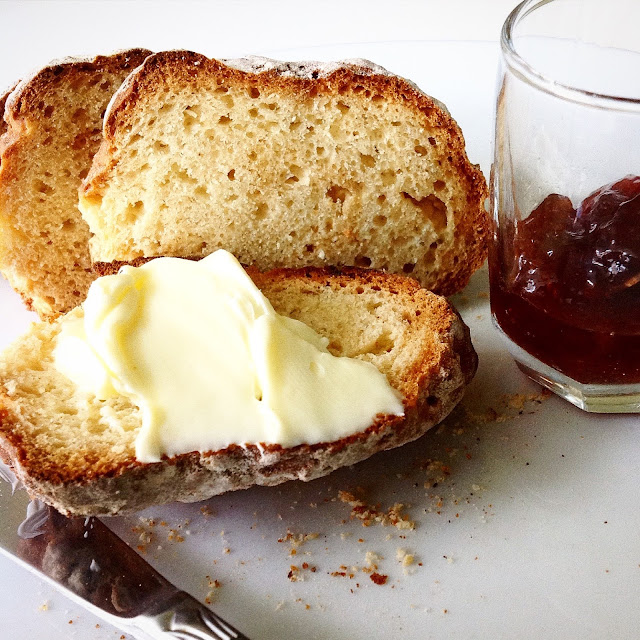 Next mission was to look for an alternative for buttermilk. Some says to add lemon juice to milk, some says vinegar to milk, and some suggests to mix milk with live yoghurt. River Cottage's recipe actually suggested live yoghurt as an alternative so that was good news to me.

And so I started my soda bread pilgrimage:

First Attempt
Sep 12, 2017
I certainly don't want to make a large loaf of failed bread and waste the lot of food, as this is my absolute virgin bread making; so I've started off with half the amount of ingredients in a typical soda bread recipe:

I did as per instructed:

Mix the flour, baking soda and salt together in a large mixing bowl, made a well in the centre and pour in the live yoghurt, and stir to mix together. Then I used my hands to roll it into a dough before I transfer it to the lightly floured flat surface to form a loaf. Floured the top well then cut a cross in the middle with a serrated knife.

Then tipped it onto a baking tray lined with baking parchment, it was another decision time: Paul's video says to let it sit for 10 minutes but Hugh said to place in the preheated (200ºC) oven immediately. I went for the former this time, which is to let it rest for about 10 minutes, then into the oven.

I was going to bake for 40 minutes as what River Cottage's recipe suggested, but at the point of 25 minutes the bread was already looking a little too brown so I reduced the baking time to 35 minutes instead.

Here's the result of the bake: 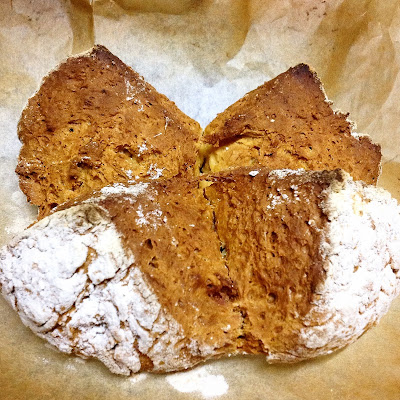 I can't really remember if I've ever taste soda bread before so I can't really judge. I'm only doing this because it sounded so easy and doesn't require a long proofing time.

And to be fair, I could've accidentally put in a little too much baking soda and salt (both very possible), and perhaps I should've added a little milk like the recipe suggested as an option.

A few days later, I decided to have another go at it.

I made more adjustment on the ingredients, based on my observation and assumptions on my last failed bake:

I first mixed the yoghurt, milk and apple cider vinegar together in a measuring glass and leave it in the fridge whilst I weigh and prepare the dry ingredients.

This time, I poured the wet ingredients in gradually whilst stirring with a silicone spatula (which i find I can get flour and dough it easily). Then I started kneading, adding a little extra milk as I go, forming a rather sticky dough.

Tipped it onto a floured flat surface and very quickly shape it into a roundish dough, this time, I didn't wait for it to rest. Right after I've floured the top and sliced a cross in the middle with a serrated knife, it went straight onto a baking tray lined with baking parchment, and into the oven at 200ºC for 35 mins (I kept it at 35 as my oven tends to get a little too hot, we'll see).

Although I'm still not sure if I've got it right, the bread does look more like a loaf of bread than before: 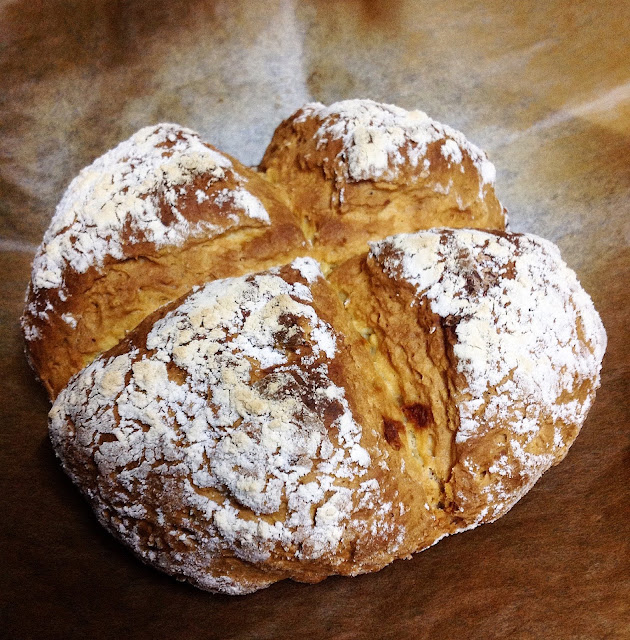 Texture wise:
Not too hard on the crust, and less dense on the inside. When I tapped underneath the loaf, it actually sounds somewhat hollow.

Taste wise:
A lot less alkaline tasting, so I'm quite sure I got the soda wrong the last time. And reducing the salt is definitely the right decision.

I believe that in the first attempt, there was not enough of acid to react with the alkali. With the additional tablespoon of apple cider vinegar might have helped the situation. But I'm still not too convinced that I've got it right yet; and come to think of it, the baking soda has been around for quite some time so perhaps it's passed its best by? That is something on my next grocery list - a new box of Arm & Hammer baking soda.

With this second bake, I broke it into four and kept in the fridge, because by the time I finished the bake it was already quite late in the day. The following morning, I took one quarter out, cut it into a few slices, warmed it in the oven at 180ºC for a few minutes before I ate it.

I'm also not too sure if I'm eating this bread right, given that it taste a little more like pretzel than the usual bread. I've had it with butter and some strawberry jam, and I've had it with a fried egg. Both worked fine for me so I guess I could keep exploring, until the next bake... 😋

Two weeks from the last attempt, and obviously I have finished eating all the soda bread I made. There's a tiny bit of Iranian yoghurt (about 3 tablespoons) left in the fridge, which is not enough for anything substantial so I thought i could try making my own buttermilk substitute with it and I can have another round of soda bread making.

I started this a day before I want to do the baking. In a measuring glass on a scale, mix the leftover yoghurt with some fresh milk that amounted up to about 320ml in total. I then added 2 tablespoons full of apple cider vinegar to it, mixed well and left in the fridge overnight. The texture became slightly thicker than milk but not curdled, and smells slightly sour but nice and fresh, not pungent.

I did the same as i did in the second round: first mix the dry ingredients together in a mixing bowl, then poured the wet ingredients in gradually whilst stirring with a silicone spatula. Then I started kneading (or rather - folding together), forming a rather sticky dough. In fact, the dough is slightly stickier than the second one, probably because the soured milk I prepared is wetter.

I'm slightly faster in handling the dough, although the stickier dough is still hard to manage so I roughly separated it into 2 portions. Once I tipped each smaller dough onto a floured flat surface I tried my best to very quickly to give it a shape. Instead of a round dough, I made 2 longish shapes to fit the tray better, and I think would make slicing easier later.

Floured the top slightly, I roughly sliced a line along the middle with a serrated knife. Placed on a baking tray lined with baking parchment, the doughs went into the oven at 195ºC for 35 mins (I reduced the heat slightly as the last time did turn out slightly hard and started to smell of burn). 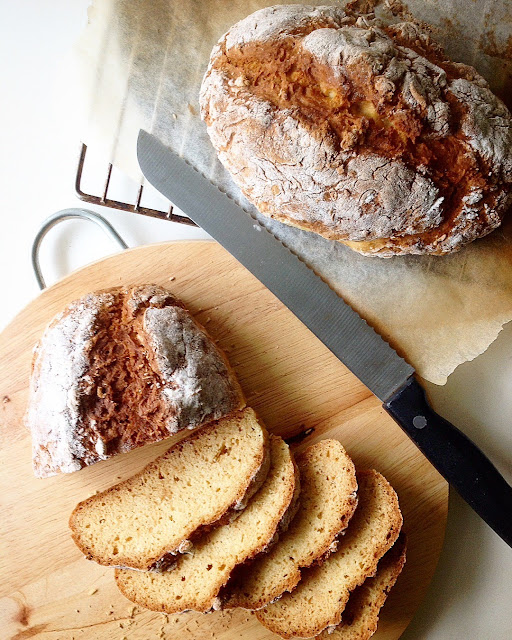 This time, I took them out when the oven pinged and they aren't burnt at all. When I tapped on the bottoms, they both gave a nice clear hollow sound.

As I only finished baking at about 8pm, I left them on the rack and under a netted food cover to cool overnight. I sliced them up the next morning and had some toasted and spread with butter.

Texture wise, it is still a dense bread but noticeably softer and the crust is less chewy than the last bake; tick.

I believe the additional apple cider vinegar has contributed to neutralising the alkali further, which has probably helped reduced the smell as well as making the bread softer (more neutralisation going on, more air bubbles would be created). I can now safely say that I don't need the expensive buttermilk to make my soda bread.

Well, these loaves may not be good soda bread yet, but I'm still chuffed by the fact that I managed to bake some edible bread. I'm definitely going to keep baking more and find ways to master it.

And these should last me a while...😀