When I do food shopping, I do regularly pay attention to the marked-down items (yellow sticker as in UK) because that can really cut food bills right down, and I'm just cheap 😁. Obviously, I'll have to be extra careful in checking the freshness of the item especially when it comes to meat: any dull colour or discolouring is a no-no, and if it gives out a stench, give it up.

I don't buy pre-packed ingredients on a normal basis due to environmental issues (excessive packaging), higher prices and limited choices; but in cases like this, I would because otherwise it will go to waste, including the packaging. So I've got this pre-packed Gong Bao Chicken stir fry set for RM3.50 (about 70p) after 50% off, which looks perfectly fine and fresh except for the shallots that didn't look their best, and that's not a big deal.

Looking at the pack of Gong Bao Chicken ingredients, I wondered if I fancy standing in front of the hot stove on this hot day. Quick answer: NO.

Then my cheeky mind and lazy self had a twisted idea: Instead of doing a conventional Gong Bao Chicken stir fry, I could have a Gong Bao Chicken stew, cooked using the rice cooker! I decided that I will give it a go, and here's how I did it: 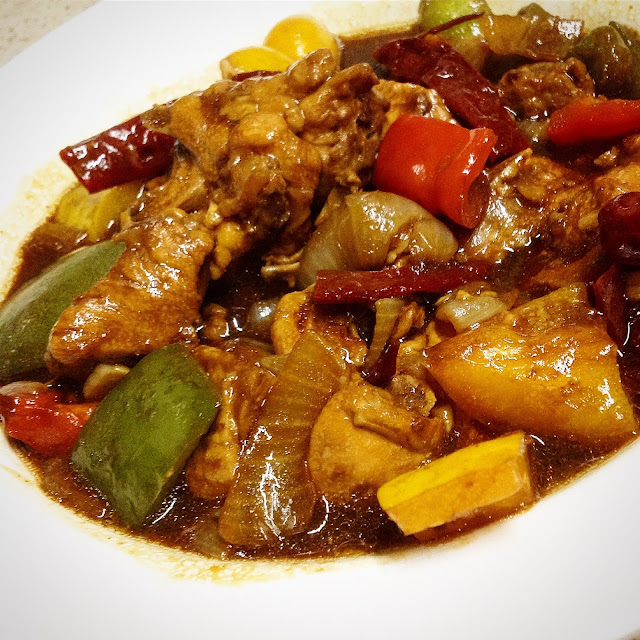 The outcome is not far from the stir fry, just slightly more gravy. I believe this would also be a great alternative for when the gas runs out whilst cooking (we're on single gas tank supply).

Says who you have to have a wok or pan to do Gong Bao Chicken? 😉