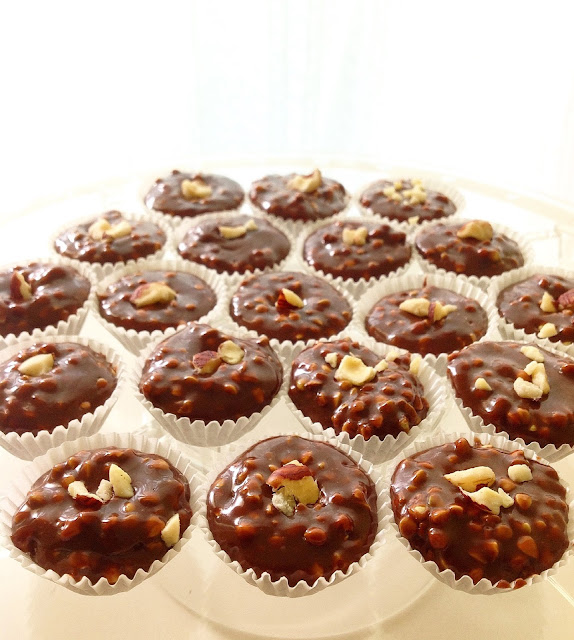 For some reason, we have a bag of organic hulled buckwheat which I've kept in the freezer for a while. Can't remember why we bought that in the first place, and I have no idea what to do with it - have never cooked or even consumed buckwheat before.

I tried looking online but nothing suits my fancy came up, then I caught a glimpse of the term "toasted buckwheat". I'd imagine that once toasted, these buckwheat grains (or whatever I should call it) would become crunchy, therefore could be eaten like cereal; likewise, anything similar to what I could use cereal to cook or bake?

Whilst I was thinking about this, I think we also have a large bar (850g?) of Cadbury chocolate (a gift) in the fridge which might have passed its "best before". I'm not a big fan of factory made milk chocolate as they are just too sweet on the whole, but if I were to make something like my nutty chocolate bites with another sugarless ingredient that would take the sweetness right down.

I took about half of the 250g-bag of buckwheat, as this is an experiment, place them in a wok (a deep saucepan would do too) and gently stir them on very low heat, WITHOUT oil, for about 4-5 minutes. By now the buckwheat looks slightly brown as opposed to slightly green when in the bag.

Transfer the buckwheat to a large bowl and set aside to cool.

Now it's time to melt the chocolate. As this is ready to eat chocolate, I didn't add any butter, cream or milk otherwise the texture would change and get too sticky and won't set (which had happened before in the past - learning from mistakes).

Putting all the chocolate (broken into small pieces) in a glass casserole, I started melting it in a "bain marie" - where the glass casserole is placed over a pan of simmering hot water. Keep stirring, the chocolate would melt in under 10 minutes, then remove from the heat.

I then poured all the buckwheat into the melted chocolate and mix through so that every grain is coated with chocolate. When the chocolate starts to thicken again, I start to scoop the mixture into little paper cake cups I've prepared in mini cupcake trays (just to hold the shape of the cups).

Put a piece of chopped hazel nut on top then let them chill in the fridge to set.

Well, unlike the nutty chocolate bites I made with dark cocoa powder from scratch, this one is a lot faster, obviously, but still a little on the sweet side for me liking. To be fair, it is a lot better than just eating Cadbury milk chocolate on its own.

None the less, the chocolate bar did not go to waste, and I've found a way to use my buckwheat. Its crunchiness is really quite a nice texture and I think I might have some ideas I could try in the future: in cookie baking, sprinkled on ice cream, add into my morning oat, etc.