My Little Adventure with Adzuki Bean

This was something I discovered when I was living in England, which amused me so much that has inspired me to writing my thesis on how the lacking of mutual understanding between European and Asian cultures have lead to certain staple food becoming new commodity in the "health food" industry. The trigger was none other than the Adzuki bean, which was positioned as the wondrous bean at that time by the popular TV show "You Are What You Eat".

I was working part-time at a health food store at that time when suddenly people were rushing in to the store to ask for "adzuki bean" after the show was aired. We had none in the shop and none of us had heard of or seen it before, resulting in many unhappy customers.

One day, my manager came telling me with the biggest smile on her face: "We're getting the adzuki bean in next week!" After a whole week of anticipation, the weekly stock arrival day finally came. 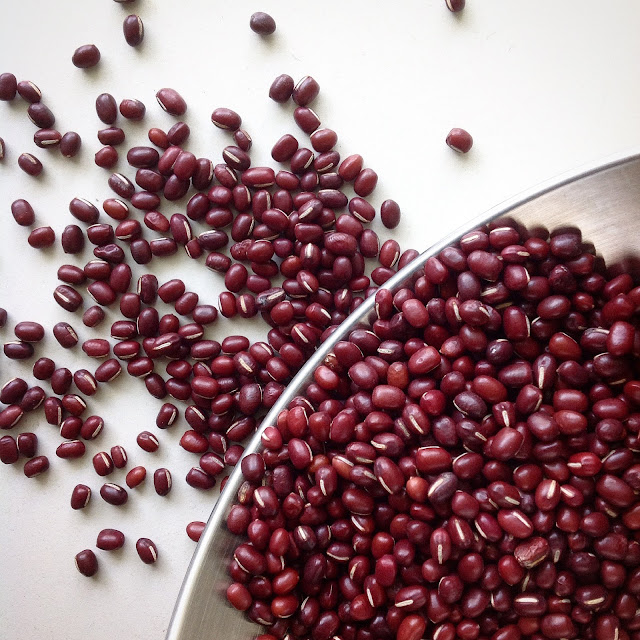 I found the box marked "Adzuki Bean"; eagerly, I opened the box and grabbed the product out - and I was stunned. This adzuki bean, that has been crowned so many wondrous achievements and was sounding like the next elixir of life, looked exactly like what my mum used to cook as red bean porridge  with every Sunday afternoon, which we called Red Bean. This Red Bean which I grew up with, was just a humble little legume that was cheap and we used to beg our mum to stop cooking it for a change.

So I bought a small bag and mailed a few beans to a friend back in Malaysia for inspection. After comparing with the red beans he had at home, he confirmed that they were the same thing!

The even more amusing thing was, when the finally very happy customers paid for the beans, they all asked: "So, what do you do with these beans?" And strangely enough, whilst it's such a hyped up media topic, none of the Chinese restaurants I've been to has adzuki (red) bean dessert on their menu. They clearly had no idea that they could've made so much money out of it.

I was rather speechless, but also thankful, as that solved my problem on my thesis research topic. My project included the development of a full website called Kowingfood.com that clarifies and demystifies misunderstanding of the Asian food culture, together with recipes. The project was submitted and I graduated happily, but I couldn't stop cooking since. I carried on running the website for the following decade until I got too busy with work a few years ago. The website got a little under maintained so I stopped it and that's why I restarted everything on this blog.

So watch out, I'll be revisiting my nan's and my mum's old red bean recipes and obviously having my own twigs 😏😋

Anyways, what is this Adzuki bean?

Some call it Aduki bean - more accurately known as Adzuki Bean or Azuki Bean in Japanese - is a very common food amongst the orients (Chinese, Japanese and Korean). It is simply known as Red Bean (Hong-dou) in Chinese, owing to its deep red colour, and there are not many other beans in China with the same distinctive colour (although it sometimes shares the name with the 'Romantic Bean', which is inedible). Adzuki beans have always been prepared as a dessert rather than a savoury meal, and has never really been portrayed as a health food or anything that does wonders, until recent years - outside Asia.

It is widely grown and consumed in China and Korea, and was brought into other Asian countries by their migrants.

You will be amazed how many different desserts you can make from the beans. Most of them are traditionally inherited through generations; some are created or modified when Adzuki Bean was made popular in other Asian countries (Malaysia, Singapore, etc). Some have even gained market shares in the Asian food industry.

If you ask any Chinese or Japanese person this question, you may not get an answer. It's been in our systems since the day they were weaned, so we may not realise that it has such a benefit. We just love our adzuki bean soup as it is.

Eating adzuki bean on a regular basis is believed to improve blood circulation, boost the immune system, reduce water retention, as well as detoxify. Detox is a process where the toxin in the body gets flushed out with the help of high fiber food intake, which leads to a cleansing effect. This will then promote the generation of new cells, which encourage metabolism. All these, are in fact, inter-related. Therefore, although adzuki bean may not help you lose 10kg overnight, regular intake of adzuki bean with a balanced in the long run diet will certainly show you some results.

Adzuki bean should not be consumed as a supplement but freshly cooked, at least that's what the Asians do anyway. Some processed food manufacturers may see adzuki bean as a money making ingredient, and start marketing all sorts of snacks and highly processed food carrying the "adzuki bean" title. That is not going to do you any good because any adzuki bean goodness will be countered by the amount of sugar and additive contained in the end product. Also, don't forget that any legume is not good for sufferers of gout; so - keep all consumptions sensible, I think.

I believe that as long as you cook your own food with natural ingredients (where and when ever possible), and consume a balanced diet in moderate amount, you are doing something good to your body. So yes, adzuki bean may help you lose weight but over not overnight. It will only happen if you cook it with the right ingredients and moderate amount of sugar or salt, consume the right amount regularly without having an overdose. Once or twice a week is a good start but it shall not be a round-the-clock meal. Have a good mix with other types of high fibre food will speed up the weight loss process.