I don't know too much about Korean food, but I do like the taste of Kimchi especially having it with some steaming hot rice, mmmm...

Although it is pretty easy to buy ready made Kimchi, the food bill would stack up over time; and I'm also rather concerned about the salt content and preservatives added in each package sold.

So maybe I could have a try at making some myself, whereby I can have a say at what goes in. 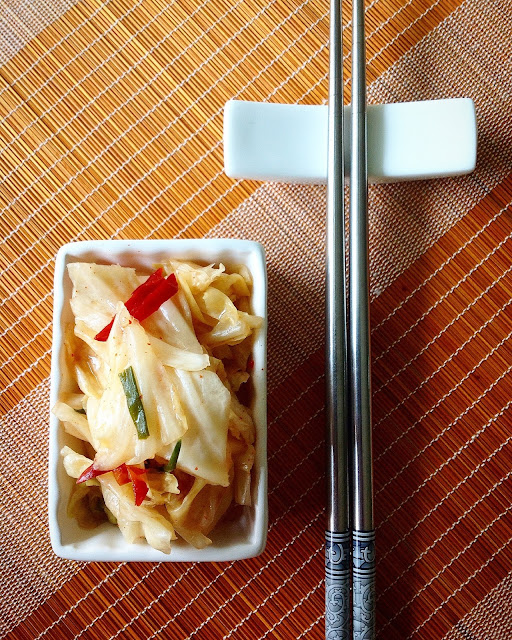 I've asked around and have done some online research mainly from Chinese sources, and I found out that traditional Kimchi is made with fish sauce and/or ground anchovies - not exactly vegetarian as I've thought that it is.

Not that I have a problem with it being non-vegetarian, I just happen to not have any of the two ingredients; and I really would like to make some or the lot of cabbage I have left from making coleslaw would go go to waste or the compost bin. Not gonna let any of that happen.

I thought I'd just wing it and experiment with a vegan Kimchi instead.

To start with, rinse the cabbage thoroughly and cut into small pieces then mix it with the rock salt in a large bowl. Leave it for about 1 hour, then discard any liquid that's been generated.

I stored it in the fridge for about 2 days before I opened it to turn the content around, and repeated every other day for about a week. I'm quite happy with how it tastes, although it's not exactly what you'd get from a Korean restaurant but it's definitely my version of Kimchi. 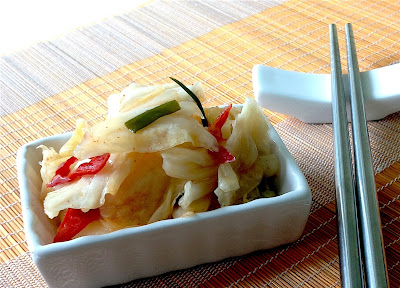