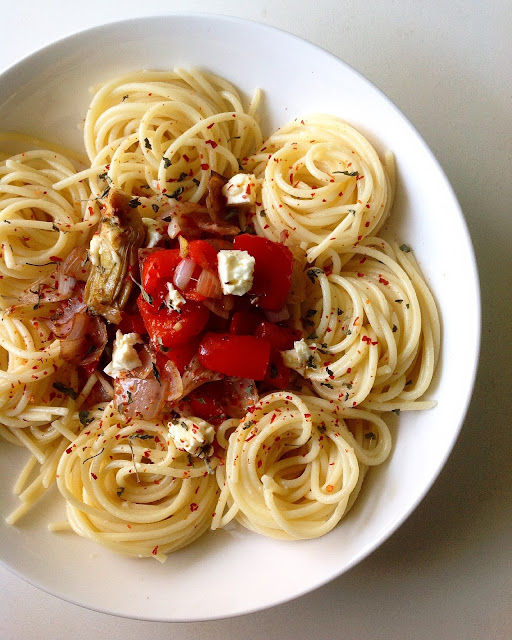 Sometimes, when I'm in my extra lazy mood and yet I want to have something nice and not settled for anything processed or instant, I'd go for a simple pasta dish. And tonight I just really fancy having it with some roasted vegetables.

All the ingredients I used are what I can find in the kitchen and made do with:

Some red bell pepper (capsicum) I'd chopped up and stored in the freezer for future use
A jar of artichoke in oil, which I took a few pieces from
1 onion, chopped into 1cm chunks
Spaghetti (remaining 1/3 of a pack)
Dried oregano
HP Brown Sauce
Salt & pepper
Chilli flakes
Dried basil (home-grown and home-dried)

The very simple steps:
There's no meat but I have to say it's rather filling, and the natural sweetness from the bell pepper and onion makes up for the taste. I've only had about half the cooked pasta so the rest would be good for lunch tomorrow, probably with some fresh basil from the garden and more feta cheese 😉