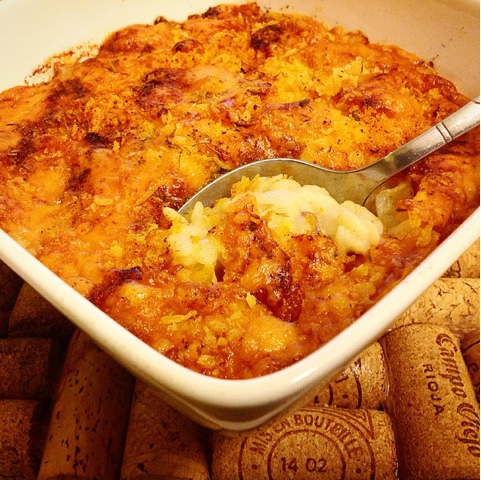 Unlike other types of pasta, the bag of 500g Semi di Cicoria pastina I bought for making the Cheese Grilled Stuffed Bell Pepper Capsicum has gone a long way. I have then made the Salmon Pastina Semi Cicoria Bake, yet there's still a lot of pastina left. 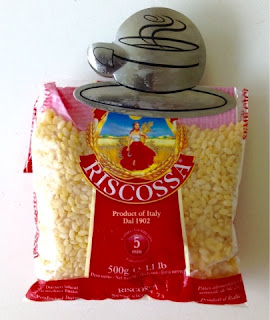 Since I have got some bacon chip left from cooking the One-Pot Genmaicha Rice, and some leftover Bearnaise sauce from Spinach & Mushroom Cannelloni which I've kept frozen; that gave me the idea of making something like macaroni cheese/gratin, but with pastina.

The ingredients I've used:
1 cup of pastina, cooked in boiling water for about 8-10 minutes, drain and lightly oiled, set aside
About 50g of bacon chip, cut into small bits
1 large onion, finely chopped
A handful of dried thyme
1 cup bearnaise sauce (I had mine thawed from frozen, otherwise I would have to make it again)
Bread crumbs (optional)
Grated cheddar cheese, as much as you like 😋
A little paprika powder

I first browned the bacon chip and the onion in a deep pan together with the thyme, without using any oil, because there is naturally existing fat in the bacon chip. Trust me, you won't need a single drop of oil to do this. The onion will be softened and caramelised after about 5 minutes of shallow frying.

Now add in the pastina pasta, stir fry for a couple of minutes, then pour in the bearnaise sauce and mix well. At this point I will make use of the moisture in the sauce and scrape off any grits stuck on the bottom of the pan. I won't cook this for too long, just a few minutes would do.

Then transfer the mixture into a large deep oven dish or a few small deep oven dishes, evenly spread some breadcrumbs over the top (this gives the top layer a little crispy texture) followed by a layer of grated cheese. Sprinkle over some paprika for a little colour and spiciness. Cook in the oven at 180ºC for 30-35 minutes, or till the top layer is golden brown.

Again, I haven't used any salt in this, because the bacon is already salty so there is no need for additional seasoning at cooking. It can always be added later on, suited to individual's taste.

Let it stand for at least 10 minutes outside the oven before tucking in, if you don't want to have a burned tongue.

I have only used about a 3rd of the whole portion to bake the gratin, and saved the rest in the fridge so I can make more another day, or cook something else with it. Will keep you posted on what I've decided to do 😀