Very often, I find myself being left with odd amount or combination of ingredients. I don't like to waste any food if I can help it so I'd usually try to whip something out, with a little twist.

Today, I've got randomly these in the kitchen and I thought I could put together some baked cannelloni:

A bag of frozen chopped spinach, and used: 6 balls, about 85g, thawed
About 80g button mushroom, finely chopped
1 onion, finely chopped
4 tomatoes, peeled and roughly chopped
2 leftover lasagna sheets that I didn't know what to do with
Some leftover cream
Ground paprika

1. First things first, I made some Bearnaise sauce:
- Heat 150ml fresh milk (I never used skimmed or low fat - yuck!) with 1 bay leaf and some sprinkle of salt and pepper, till just before boiling. Remove from heat and put aside, with lid on.
- Heat 2 tablespoons butter in a saucepan on low. When the butter has melted but not bubbling, mix in 2 tablespoons of plain flour with a whisk (I like using a small silicone one as it gets to the corner of the pan) until it becomes a smooth paste.
- Fish the bay leaf out of the milk and slowly tip it into the butter paste, a little at a time, and keep stirring to avoid clumps.
- Keep it on the lowest heat and keep stirring till it becomes a smooth white sauce. If it's too thick just add a little milk, and if too runny, a little more flour.
- This can be made a few hours ahead, just need to stir it again to regain the smoothness before use. Some say you can freeze it for future use but I have never tried it. Not sure that the consistency would be the same. After all it's really not that difficult to make.

2. Then I made the tomato sauce base:
Brown the onion with some dried oregano in a saucepan till translucent, add in the chopped tomato. Bring to a boil then turn the heat right down and let it simmer for about 20 minutes, stirring from time to time, or until it is taken down to a sauce consistency. Season with salt and pepper, and a pinch of sugar.

3. Whilst that is simmering, boil some water and soak the lasagna sheets in a large deep plate. When they are soft, break them into size big enough to roll into a cylinder each. I just broke each sheet into equal halves.

4. Now the filling:
Mix the chopped spinach and chopped mushrooms in a bowl, add in a little cream (even yoghurt would do if there's no cream) and season with salt and pepper. Roughly divide the mixture into 4 equal portions in the bowl. 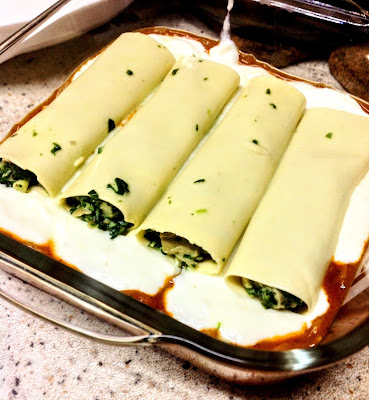 5. Lining the dish:
In a square baking dish (I've used an 8" dish), spoon half the tomato sauce evenly onto the base. Then spoon a layer of Bearnaise sauce over it, just like you'd do in preparing lasagna.

6. Here comes the fun part: making the cannelloni. As I don't have any ready cannelloni pasta, I'll have to roll the lasagna sheets into tubes.

Pad dry each sheet of pasta on a clean kitchen towel. Spoon each portion of the spinach and mushroom mixture onto it and roll it up, making sure that there's enough overlapping sides to close up the tube. Place the filled up tube onto the sauce, starting from the side. Repeat this and place the rolled up pasta alongside each other. If there's any leftover filling just mix it in with the rest of the tomato sauce. 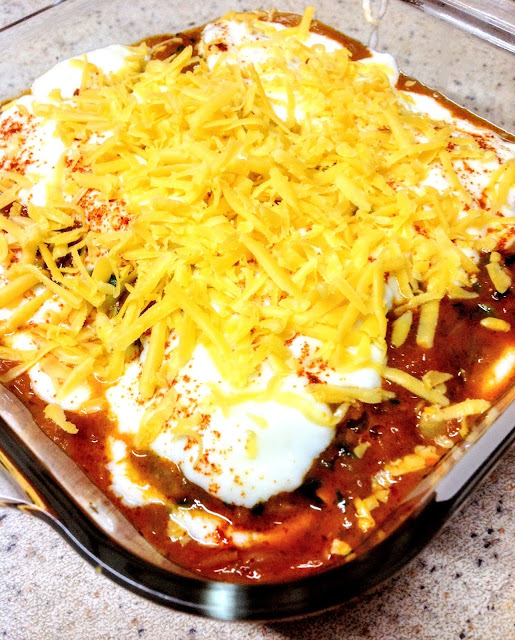 Pour the rest of the tomato sauce over the pasta, then layer with some Bearnaise sauce, enough to cover the pasta. Sprinkle some paprika over it, then top with some grated cheddar cheese.

7. Cover the dish with foil, bake @190ºC for 15 minutes, then take off the foil and bake for another 10 minutes. This takes shorter time than making from the hard cannelloni tubes, as the pasta is already soft. Otherwise it would be too mushy. 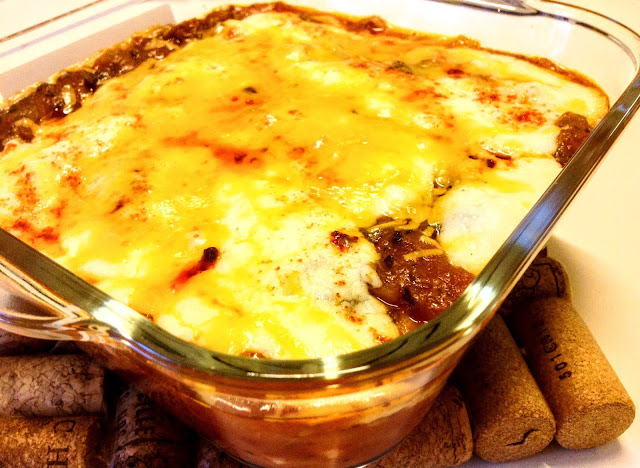 I would have some meat in it if I feel like it, but as of now, I quite like how this turns out for me 😃