When you have a small family, doing a roast often leaves you with too much leftovers, or you just simply ended eating too much. However, of late my local butcher has started selling pork neck cut in more sensible portions and that's really good news. I also find that meat of this cut gives a really juicy bite and it's not as expensive. 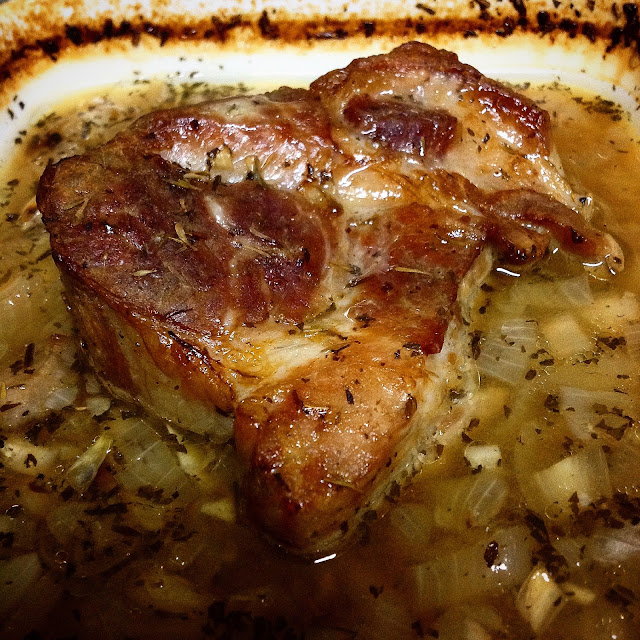 Since it's Sunday, I got ourselves 2 portions of the pork neck and marinade them (for at least 1 hour) with the following mix:

Note: Again, I didn't use any oil, as there's existing fat in the meat layers.

Place it over a bed of chopped onion (about 2 medium size ones) and chopped garlic (about 2 cloves) lined in an oven dish. Fill the dish with boiling hot water up to at least half the thickness of the meat, but not covering the top. The hot water should be poured over the meat so that it blanches it slightly.

Roast in the oven at 150ºC for 1 hour and a half, turning over and basting it every 30 minutes. If the water runs low, I'd just add a little as I go. Then cook on 190ºC for another 20 minutes or until the top is nicely brown and crispy.

By now the liquid will turn into golden-coloured, tasty broth which can be used for preparing gravy, or be served with the meat directly. When I cook a bigger portion and end up with a lot of the broth, I will freeze it for future use: soup, stock, etc.

Out of the oven, and let it stand for about 10-15 minutes. I like it with some coleslaw or fresh salad and nice loaf of multi seeds bread from a bakery near me. But really, you can eat it with just about anything.