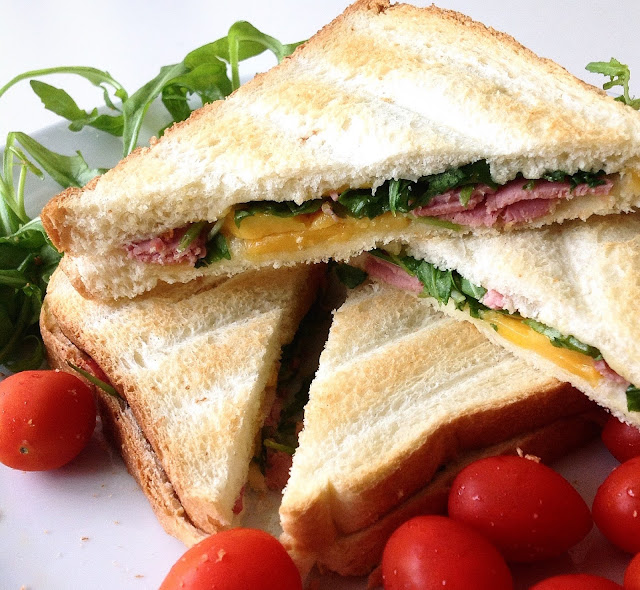 I'm not sure about everyone else, but I often find ourselves being left with 1 slice of ham that is not enough to do anything substantial with, or half a bag of rocket that may not be nice to be eaten as salad. I grew up in a frugal household where no should ever go to waste (even food scraps would be given away to pigs farm), no surprise here that I've adopted this habit too.

So this is one of my ways to use up every last bit of the odd amount and combination of ingredients.

I tore the 1 miserable slice of leftover ham into tiny strips, picked out the rocket leaves that have passed their best (doesn't look presentable but still edible) and broke them into small pieces.

Mix the two together and layer them with some cheese on two slices of bread (also been kept fresh in the freezer), then top with another slice each.

As we don't have a microwave oven, sandwich maker, or any kind of 'maker's. Any grilling or toasting is done by our almighty conventional portable oven. To start with, set the oven to 200ºC.

When the sandwiches are in the oven, turn the temperature down to 150ºC and grill for 8-10 minutes. By then the cheese would've been nicely melted and the bread golden brown and not burnt.