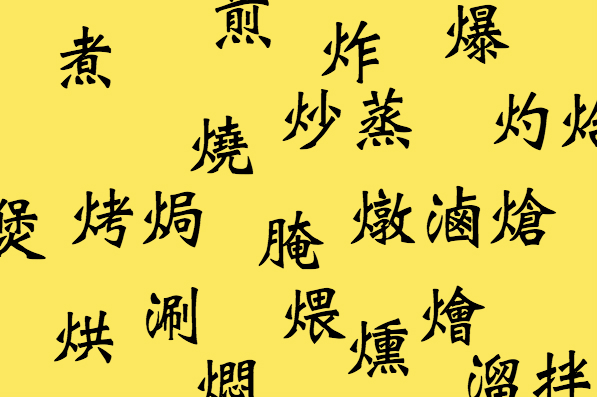 The Chinese have so many different terms in defining and differentiating each specific cooking method, and can't be done with just the general 'cook', 'bake', 'roast', 'fry' and 'boil'. Each method has an existing Chinese character for it.

Based on my very limited (but probably enough) knowledge on Chinese cooking terms, I've done a glossary list with descriptions in English. Hope this would be a little fun useful list. Will keep adding as and when I discover new ones 😊

(Chinese pronunciation guide is based on PinYin standard)

煲 Bao
Specifically for 'boiling', for water and soup, and food with large amount of water over a period of time.

拌/撈 Ban/Lao-when used in Cantonese
The technique of mixing sauces and oil into cooked noodle as seasoning, for example dry wonton noodle. Noodle is first boiled in boiling water, drained and placed onto a plate where cooked oil and soya sauce are added, then tossed and mixed well into the noodle. Can also mean tossing salad in its dressing, or adding sauce to rice.

灼 Zhuo (烚 in Cantonese - Xia)
A very basic technique especially in Cantonese cooking, where food (such as whole chicken or prawns) is simply cooked in boiling water or soup then drained and served. Works best with fresh meat, not frozen.

烤 Kao
Roast, more often related to the use of flame. Also used for 'baking' bread.

燒 Shao
Braising technique which begins with high heat, then low to cook through, followed by high heat again to reduce the sauce. In another context: Grill.

燉 Dun
Double-boil. Where all the ingredients are placed with water (enough to cover all the ingredients or more) in a covered ceramic casserole, which is then placed over boiling water in another bigger pot to steam for several hours. Usually used for delicacies such as bird's nest soup, herbal chicken soup, etc.

滷 Lu
Cooking food (particularly meat and eggs) in a stock made from various spices, ginger, sugar, dark soya sauce and light soya sauce, etc, on low heat for a few hours till the dark coloured stock is heavily absorbed into the meat or egg. The stock can usually be cooked and kept for a long time, and be used over and over again; because it's believed that the aroma and taste get better over time. Similar to stew and braise.

熗 Qiang
Generally used in preparing vegetables, where vegetables are lightly cooked in hot water or oil, drained then topped with sauce mix such as oyster sauce and fragrant oils. Usually treated as a snack or side dish.

腌 Yan
To marinate with salt or other seasonings.

爆 Bao
A quick frying method, using less oil than deep-frying, to get food in crispy texture and not over cooked. For example the 'browning' of meats and crispy onions.

涮 Shua
Fondue, or "steamboat" in some Asian countries, where food is thinly sliced and cooked by dipping it into boiling soup, and to be eaten on the spot.

燜 Men
A stewing or braising process, in which case the ingredients are fried with oil, then transferred into another pot (usually a clay pot) to be cooked on low heat, with the lid on.

煨 Wei
Stew. This technique is very close to the English stewing technique, but without using an oven.

燻 Xun
Smoke, by placing food on a stand in the pot over the stove, with smoking ingredients such as spices or tealeaves underneath the stand.

燴 Hui
Similar method as "braise", but with starchy and less amount of gravy.
Also a term used as 'baked' especially sweet potatoes on an open fire roast in a foil wrap. A street food specialty often can be seen in China and Taiwan.