The cheapskate that I am, I get a lot out of a 300g-jar of feta cheese in olive oil. Obviously we love the cheese and it goes into whatsoever dishes as I wish; but the olive oil is never going to waste because it will be used to oil my pasta and dress the salad, and as dipping oil for bread. It makes them taste so much better. So we do get it quite often.

Feta cheese in Malaysia is getting more and more expensive! A 300g-jar of feta cheese in olive oil and herbs has gone up to almost 20MYR, but the last one I bought was only about 17MYR. Just because it's not a common habit for the locals, cheese - any cheese that's not Kraft processed cheese slices - is being classed as gourmet food. Aaarrrrrgh!

Whilst I can't just move to a country where cheese is reasonably priced, I'll have to try to get the closest to what I want with the least money spent. 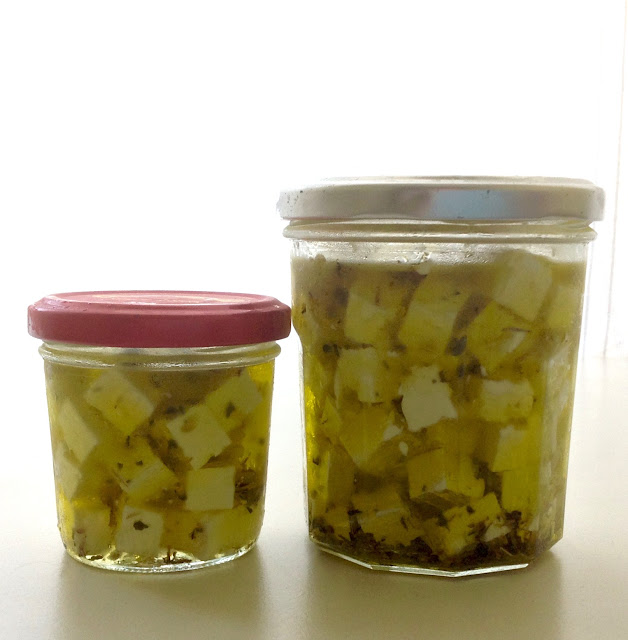 Instead of getting one sold in oil, I opted for a simply-packaged block of 200g Emborg feta cheese in brine that only costs half the unit price. After discarding the brine, I cut the feta cheese block into small cubes and filled a 360g jam jar and a small jar (100g ++?); add in some dried oregano, thyme and some basil which I harvested from my little herb garden and dried over time, and topped up with some olive oil. In they went to the fridge, and, done.

By the looks of it, the amount that turns out looks a lot more than what I usually get from the 300g jar of feta cheese ready packed in oil. Now I realised that the net weight also included the weight of the oil.

In less than 30 minutes, I've the following birds:
1. Saved myself 10MYR at face value
2. Got at least 50% more than what I would've gotten,
3. Used up the olive oil that was in danger of getting stale in the tropics.

I now look forward to having my dinner with it 🍴🍷🍝