When I read Japanese manga, the dish Omurice often pops up and sounds so tempting so I decided to have a go at making it myself.

From its description, it sounds similar to Nasi Goreng Pattaya that is quite popular in Malaysia - fried rice with chicken (or other meat) and mixed vegetable wrapped in omelette. Even the way it's being served with tomato sauce dribbled over it, is the same. 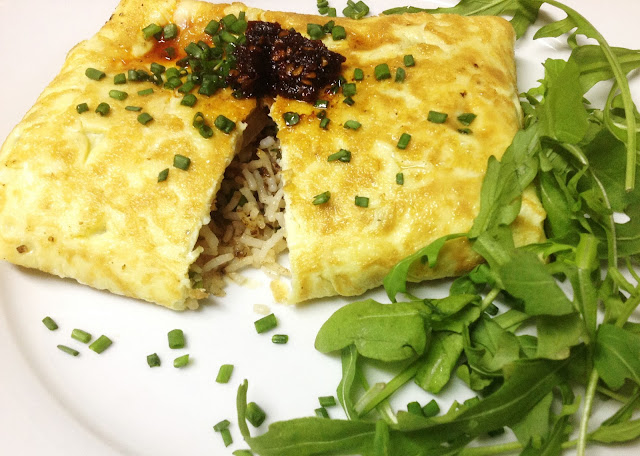 I have never eaten Omurice before, but I have had Nasi Pattaya on many occasions so I have made reference to what I know about the latter.

Obviously I would need to have cooked rice ready, and I had some leftover from the evening before.

2 eggs (for each wrap), beaten with 1 teaspoon of flour and a pinch of salt and pepper, set aside. 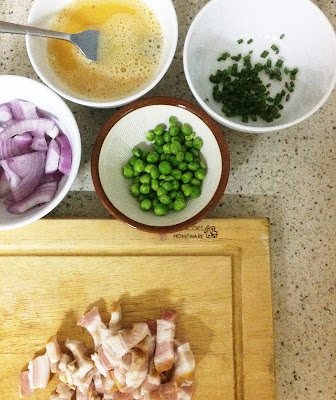 Green salad of your choice, as side.

Here's what I did:

Heat some oil in a wok, brown the onion for a couple of minutes, then add in the bacon chip and peas to stir fry for a few more minutes.

Add in the cooked rice, keep stirring with quick movement so that it is mixed with the other ingredients. Add in the light soya sauce, stir well.

Transfer the fried rice into a plate and set aside for later.

Make sure the wok is clean, now heat a tablespoon of oil on medium low heat.

Carefully pour the beaten egg into the wok in a circular motion, from the outer rim of the wok. (Note: this may have worked better and easier own a flat pan, but unfortunately wok is all I got) Twirl and turn the wok around so that the egg covers as much space to make a circle, and so that it is as evenly thin as possible.

Turn the heat of at this point, and carefully scoop in the fried rice. 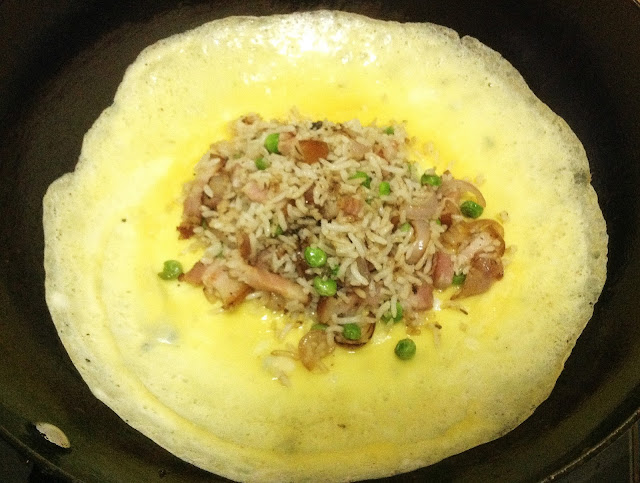 Turning the thin layer of egg over to wrap the fried rice is quite tricky, especially if the egg is not firm enough or too cooked. This is why I turned the heat off when it starts to firm up but the middle is still wet.
After a good few minutes battling with the egg, I finally managed to wrap it around and make a pocket. Now would be the time to turn it over and have the heat on again just to cook it for another minute or so. 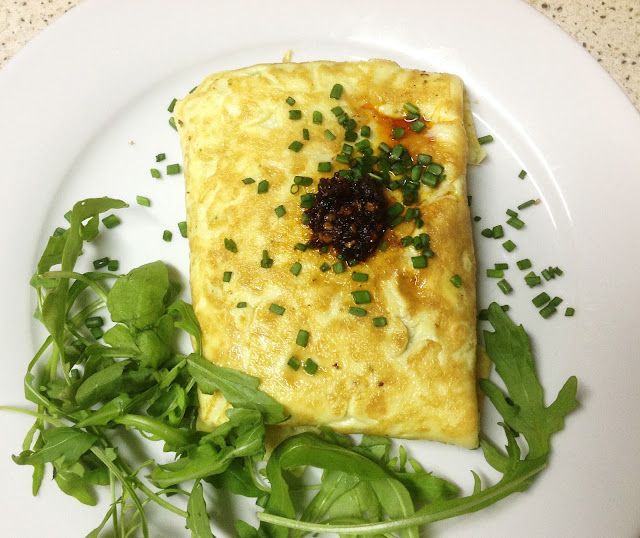 Once it's on the plate, sprinkle the chopped spring onion and garnish with any salad side of your choice - mine is rocket.

I'm not a big fan of tomato sauce so I've opted for some ground chilli in oil.

This, is my version of Omurice.