A Chinese chicken stew in soya sauce is one of those things I grew up with, also one of the very few dishes I managed to learn from my late grandmother. This is a one-pot slow-cook dish, which may take up to 4-5 hours if required. This means that I could leave it to stew whilst I step away from the fire and probably get my hands on some other chores. 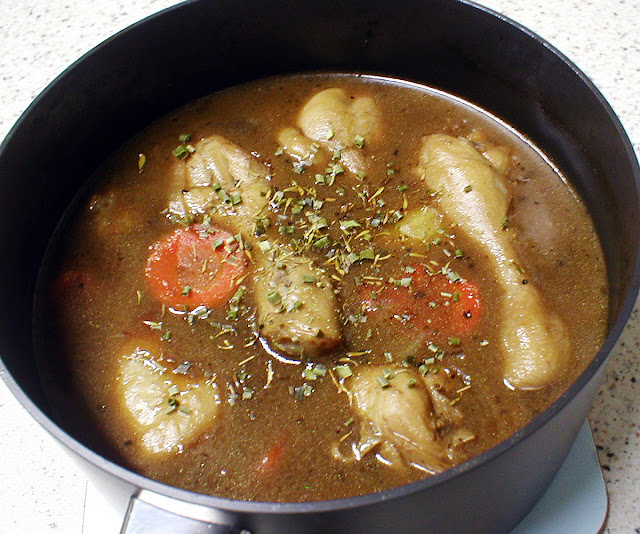 After hours of slow-cooking, the seasoning used will be richly absorbed by the meat, and the meat will also be juicy and tender.This can be cooked with a whole chicken (chopped up in small pieces) or just the drumsticks and thighs; but not breast meat on its own otherwise it will be rather tough and less tasty.

But really, the amount is dependent on what I can get hold of, or how I feel at the time of cooking. There is some flexibility as long as it doesn't taste too salty or too sweet.

A claypot is ideal, but failing that, a slowcooker or a normal pot with cover would just do the job.

For a slightly low fat option, you can throw away the skin. But do not use breast meat thinking that it is a healthier choice. The taste and texture will be disappointing unless you really love tough and tasteless meat.

To have thicker gravy, just add in a little more flour or breadcrumbs.